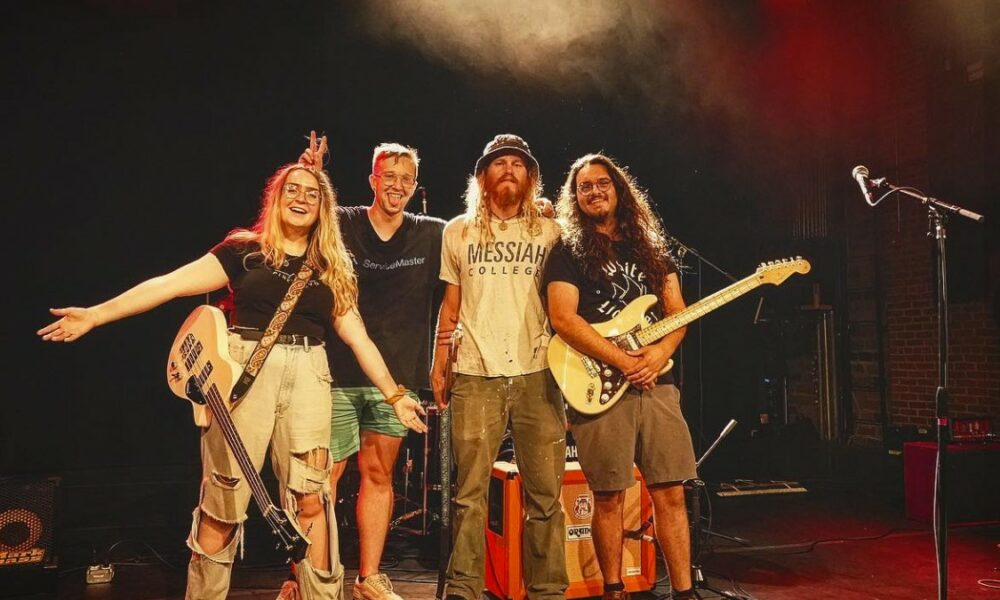 Today we’d like to introduce you to Christian LeDuc. Them and their team share their story with us below:

Dan Matthews, Rob Mandujano, and Christian LeDuc met in the University of Cincinnati marching band in the summer of 2018. After playing music for an entire marching season, the boys decided to form a band, but they needed a singer.

One night in December, Dan invited Ben Jervis to jam. The moment Ben got on the mic; the guys knew they had something special. That night, White Lighter was born. Throughout the first part of 2019, the band started performing in Cincinnati and writing music.

In the summer of 2019, Rob moved to Los Angeles for grad school, so the band brought in Ethan Qureshi to play lead guitar. The guys didn’t miss a beat. They continued playing shows and gaining fans until March 2020 when COVID-19 hit. White Lighter didn’t play a show for more than a year. During that time, the guys focused on learning covers and writing originals.

In April 2021, the band played its first live show and really hit the ground running. After the COVID lockdown, local music took a massive rebound. In between gigs, the band began releasing singles and working hard on an album.

Despite some major technical setbacks, the band released its debut album “Natural Law” on the very last day of 2021.

Throughout early 2022 the band continued to play all kinds of shows. From college house parties to private corporate events, they learned to be extremely versatile and able to adapt to any opportunity. This enabled them to see a lot of fan growth across a diverse range of people.

At the start of the summer, bassist Dan Matthews decided to take a temporary step back from the band to focus on other priorities. The group brought in talented bassist Hallie Menkhaus to fill in until Dan’s return.

After discovering that Ben, Christian, and Ethan had a great musical and personal chemistry with Hallie, it was decided that Hallie would step in as a permanent member of the band moving forward.

In August of 2022, the group was invited to New York City to be part of a vinyl project with Leesta Vall Sound Recordings. The band quickly sold out their session and had a very successful show at The Rockwood Music Hall in Manhattan. White Lighter is hoping to return to New York and work with the studio again in the near future.

At the time of this interview, the group is almost fully booked through the end of the year.

In 2023 they are looking to not only continue to play locally, but they are working to book shows all across the country and even internationally. A few major cities that are already on the books or are close to being secured for a live show include: Cincinnati, Los Angeles, New York, St. Louis, Lexington, Memphis, Dayton, Columbus, and Chicago.

The band is currently working on their second album with new member Hallie and continues to write and jam with bassist Dan Matthews. A release date for the album has not been announced.

Would you say it’s been a smooth road, and if not, what are some of the biggest challenges you’ve faced along the way?
It has not been a smooth road. The music industry is probably one of the most difficult business to be in, especially if you are an up-and-coming band. Not a lot of people take you seriously, and many people are trying to take advantage of you, yet it can also be extremely rewarding. There is no greater feeling than playing your songs and looking out into a crowd of people dancing and having a great time.

Unless you are signed by a major record label or have a lot of money to put yourself on Spotify playlists, it is very difficult for smaller bands to gain a digital following. For example, we have seen the most growth from our live shows. We play out every single weekend, multiple times a weekend. We’ve been successful booking shows in other cities like New York, St. Louis, and Lexington, but for every one person that gave us a chance to play at their venue, 30 people ignored us.

Trying to be successful in the music industry can sometimes feel like an endless circle. For example, most bands build their following in new cities by playing live shows in those cities. But many venues only want to book bands that already have a big following in that city. So, it is really difficult to even get a foot in the door in some cities.

So, it really just comes down to people giving you a chance. You can send 200 pitch emails and maybe get 10 responses that will turn into 5 shows. It can be really brutal, but you can’t give up because all it takes is getting the right person’s attention.

That being said, I don’t think people realize how much work is involved. It’s like 10% actually being a musician and 90% pitching, booking, marketing, networking, and promoting. I spend more time creating promos, managing social media, and handling booking for the band than I do behind the drum set.

We treat the band like a small business, but there are no “investors” that can help carry the business while in its early stages.

Trying to make money is very difficult. All of us want to do this for a living, but right now, that isn’t possible. We have tens of thousands of streams on Spotify, yet we’ve made less than $200 off our own music. House shows near college campuses are the best way to gain young fans, but those shows don’t pay. So, in order to gain the most fans, we play a lot of these free shows. But in order to make money as a “business”, we have to constantly play out at bars and restaurants to make enough money to put into marketing. The pay for bars, restaurants and private parties is pretty decent, but many places only want a live band on the weekend. So, the “business” is only generating money 2 days a week. Merch sales help, but then again merch is an added expense.

Like a small business, we care deeply about what we are doing, and we love it very much and could never see ourselves doing anything else. We are confident that despite whatever roadblocks are in our way, we will overcome and keep pushing.

Alright, so let’s switch gears a bit and talk business. What should we know?
We are a band from Cincinnati that would love to book a show in your city so check us out and let’s set something up!

Christian ~ You should know that the four of us love playing live shows more than anything in the world.

Hallie ~ We are very intentional with everything we do. We just really do it for the love of doing it.

Ethan ~ I spend most of my day creatively thinking and actively trying to pursue a career in music. It is more than just a passion. It is a lifestyle.

Ben ~ We are a band that makes music for people that enjoy music.

Christian ~ I think we are known for really being professional and collaborative and willing to work hard and take every opportunity that we get seriously.

Hallie ~ We put on a kickass show. I think that’s the reason we get asked back to so many places. And that’s why the same people come out to see us often.

Ethan ~ We are known for energetic shows and passionate performances. Whether it be covers or originals we put our whole heart into what we are doing, and we put on a very entertaining piece of art.

Ben ~ Since we are a band that makes music for people that like music, I would say that we are best known for making music.

Christian ~ We can make 18 to 22-year-old college kids go crazy at a house party, and we can make a 60-year-old couple get up and dance together at a bar. People of all ages can enjoy a White Lighter show.

Hallie ~ We are completely ourselves. That sounds super cliche, but we put on a show with our playing not our performance if that makes sense.

Ethan ~ The four of us come from extremely different musical backgrounds, and we blend it all to match our band but not be set in one genre. We all collectively sound like White Lighter, but White Lighter is not just on genre. It is hard to label us.

Ben ~ We just make music; we don’t search for gimmicks and flashy stuff. The music speaks for itself.

Christian ~ I am the most proud of where we are as a band right now. It is really cool to see our growth in real-time. It’s just nice knowing people like what we are doing.

Hallie~ Probably our outreach. The fact that we are recent college graduates that are having the ability to play regularly in a lot of different parts of the country. Shows that we are really committed to making this work.

Ethan ~ I am most proud of writing recording producing and mixing, and mastering all of our songs together. We are the musicians, the recording engineers, and the marketing team.

Ben ~ I am happy that we are able to share our music with people via the internet with our first album, “Natural Law,” and that we have even more music on the way.

Hallie ~ The best things in life happen on accident. I wasn’t even supposed to be in the band, but it’s kind of just happened. And now I couldn’t imagine life without doing it.

Christian ~ I want whoever is reading that article to look us up, and if you like our music, reach out, and let’s figure out how to get to your city and put on a show for you and your friends.

Ethan ~ I want readers to take us seriously. Don’t take us for granted. We are a real band. We are real people with real passion. We know that we can be someone’s favorite band. It is just the matter of someone giving us the time of day. I want readers to listen to our music, and it have a meaningful impact on their life.

Ben ~ I want the readers to know that we are all hardworking people that our hard work is starting to pay off. We continue and appreciate all the support because it helps us keep doing what we want to do.

If you had to, what characteristic of yours would you give the most credit to?
Hallie ~ I think specifically for our successes in the music industry so far is that we work really well as a band. Both personally and musically, we all click really well.

Christian ~ I think it is our drive. We all make a lot of sacrifices both professional and personal to be able to do what we are doing. We all have “day jobs,” and a lot of us use our time off to travel to different cities for gigs and stuff when we could be spending times with loved ones.

Ethan ~ Our musicianship is so strong. We wouldn’t be where we are without Ben’s massive voice. Christian plays in a way that is arena-ready. It is very entertaining. Hallie has these really funky bass lines that stand apart from just a cord progression. In a lot of our recordings, Dan played with the song, not to the song. Dan has extremely interesting bass lines that are extremely complex and difficult which is what makes some of our early work more magical.

Ben ~ I would say Two things that have made us do what we do. Hard work and being genuinely who we are. 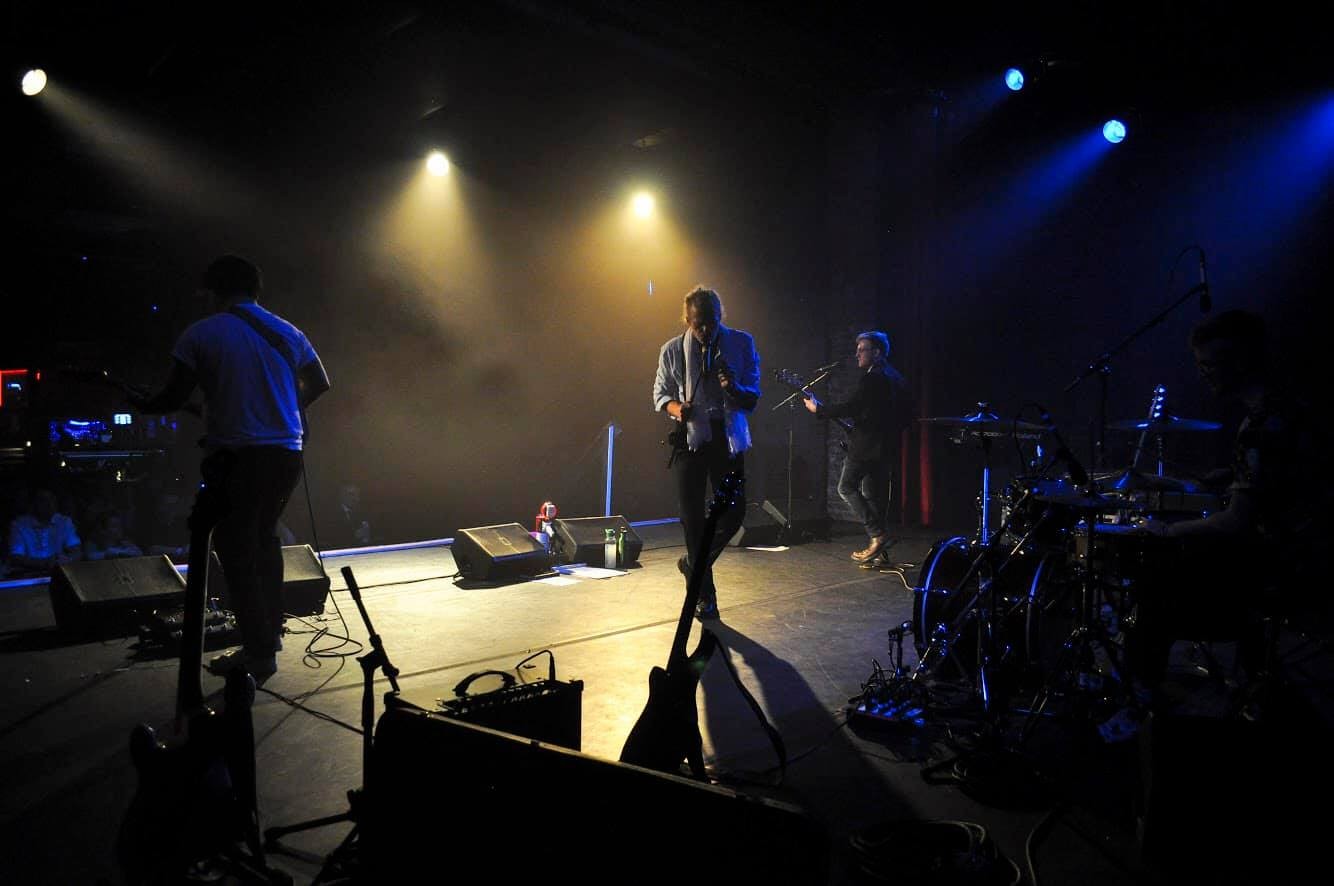 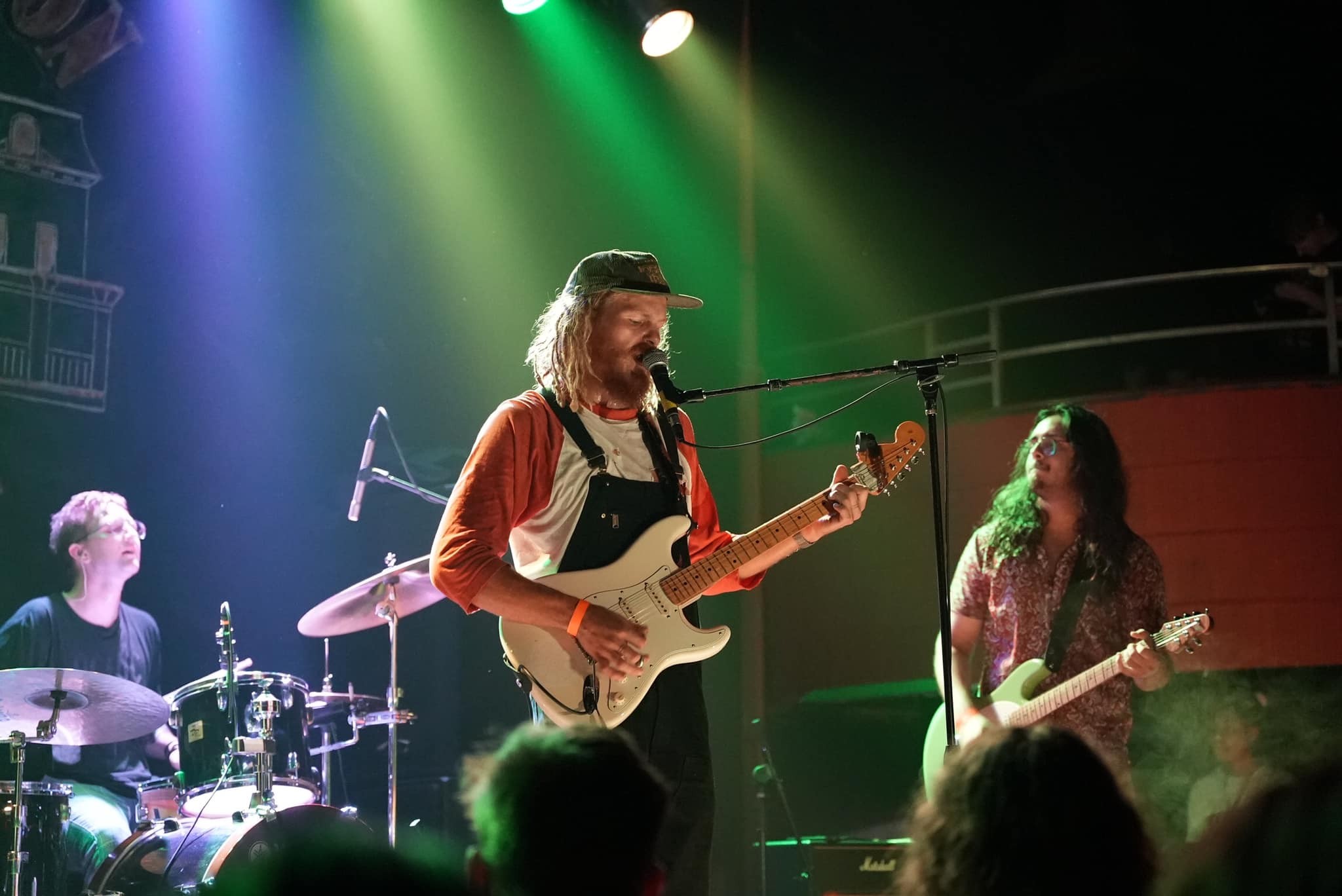 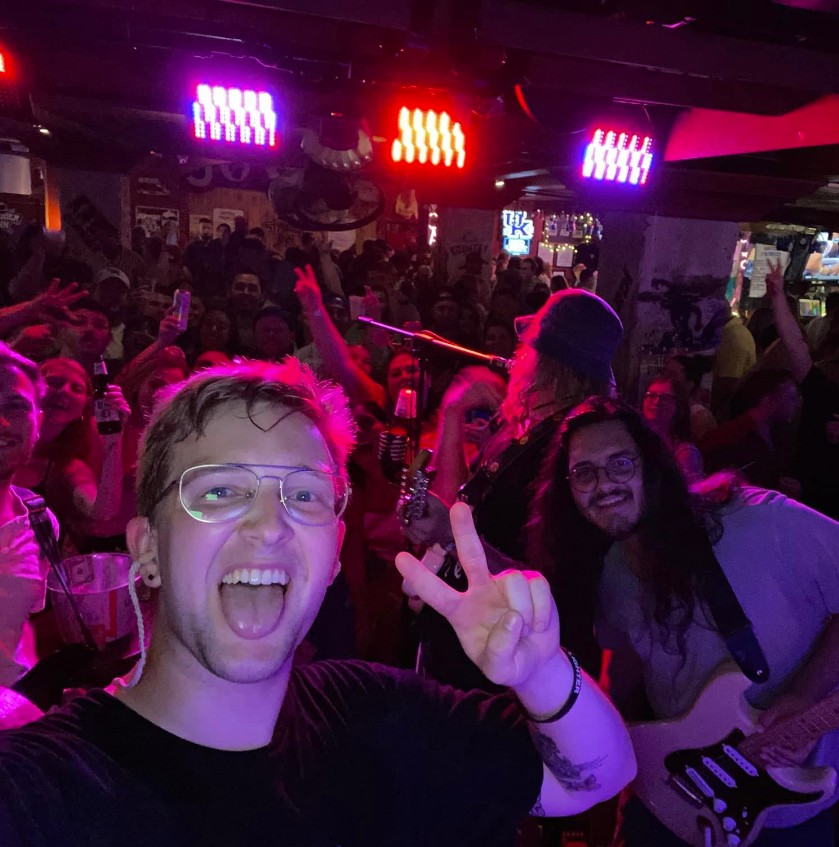 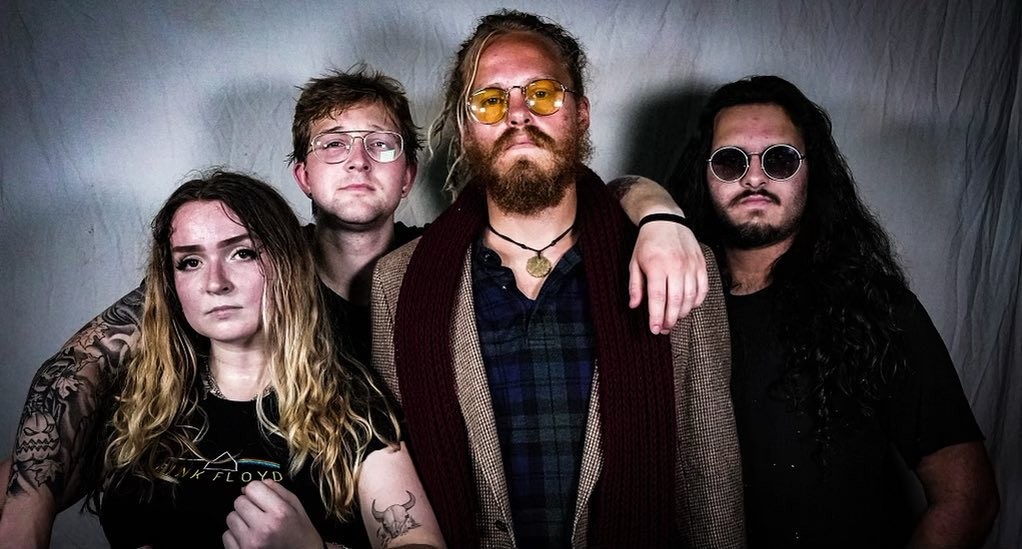 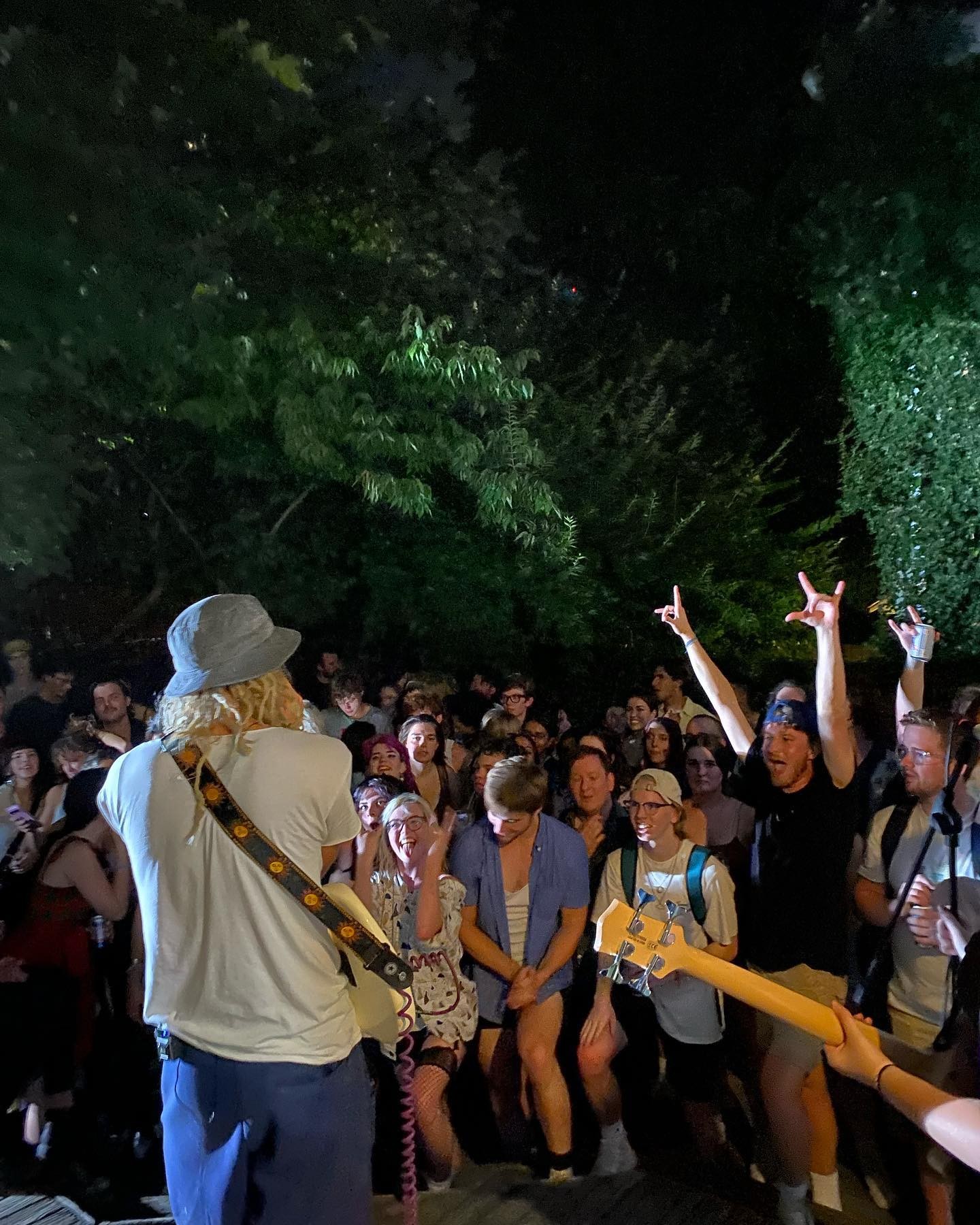