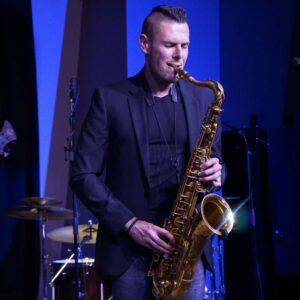 Today we’d like to introduce you to Matthew Alec.

Hi Matthew, thanks for joining us today. We’d love for you to start by introducing yourself.
Wow! Well, I’ve had quite a journey. I’m mainly a saxophonist by trade, although I’ve found myself in the record-making business recently, too, producing music and attempting to run a small (but wildly ambitious) record company. I started playing sax in the 10th grade, although I had zero interest in the instrument until well into high school when I caught the jazz bug. Once that happened music became an integral part of my life and I’ve never looked back.

I set out to Kent State University to study music after high school… I was wildly unprepared, but it proved to be the right choice and learned a ton while I was there. I also befriended a number of musicians and formed a band called Winslow that set me down the path to professional music. I recorded three albums with them, we had a couple of record contracts, and we did some touring. We were all hoping to make it ‘big,’ but that act broke up and it never happened. Still, a lot of the things I’m doing for my act and record company now I learned from being in that group.

After Winslow disbanded, I did the whole ‘gun for hire’ thing around Cleveland and Akron as a saxophonist. I played with a number of groups during that time. My general thought was take any gig that came my way! Haha. Some were good, some not. It was during that time (which was a few years ago now), I had the idea to form my own jazz fusion act. So, over the course of about a year, my group Matthew Alec and The Soul Electric came to fruition.

Our first album “Cleveland Time” came out earlier this year and features trombone legend Tom “Bones” Malone (as well as a number of talented Northeast Ohio musicians) and it charted on the NACC jazz radio charts for a few weeks and was featured in some huge publications, so all in all I’d say it was a success.

While I was in the process of recording the album I had the crazy idea of launching my own record label to release it on as well. It was one of those funny ideas I had at about 4am one morning when I couldn’t sleep. The record label is aptly titled Cleveland Time Records and fittingly “Cleveland Time” was its first release. The label is intended to record, market, and distribute jazz and jazz-related music from Northeast Ohio musicians to a worldwide audience. The next few releases are already planned and I’m super excited.

Would you say it’s been a smooth road, and if not what are some of the biggest challenges you’ve faced along the way?
Has it been a smooth road? That depends very much on how you look at it. Just like all things in life, perspective is key!

In one sense, it’s been a very rocky road trying to find money, ironing out schedules with several parties for rehearsals, recording sessions, live performances, and music videos (I’ve often referred to scheduling musicians as herding cats), writing tunes, and OH WAIT, there was this little thing called a PANDEMIC that happened right in the middle of trying to record an album. Whoops… yeah, that definitely made things challenging. I can recall the second studio session with Jim Stewart (engineer) in which we couldn’t be in the control room with him to listen to the audio playback after we recorded due to social distancing concerns… but, we got through it and it all worked out.

In the other sense, everything thus far as worked out almost perfectly. Most, if not all, of the things I’ve planned have gotten done and they’ve turned out almost exactly as I’ve envisioned thus far. So, in a bigger picture kind of way the road has been somewhat smooth. Knock on wood.

Alright, so let’s switch gears a bit and talk business. What should we know about your work?
I’m a jazz and popular music saxophonist. I also play enough piano to be dangerous! Haha. I’ve been playing for roughly 28 years. I got my Bachelor’s in classical music from Kent State in 2007.

I’ve been a part of four albums now (three studio albums), one of them had Rock and Roll Hall of Fame inductee Bernie Worrell on it, but I’m definitely most proud of my latest album “Cleveland Time.” It didn’t turn out exactly as I hoped, but it sure came close and to have someone like Tom Malone on it just put the icing on the cake. It’s absolutely my biggest achievement as an artist thus far.

As a saxophonist, my ‘signature’ at this point in time is my big, full tone and use of the altissimo register (those are the super high notes!). I’ve studied a ton of John Coltrane and Michael Brecker (both jazz GREATS) and both of them have rubbed off on me and I think it may be starting to show in my performances, particularly Coltrane.

In addition to just what I bring on a performance level, I’ve developed into a strong producer and songwriter and I’m starting to get the hang of the business side of music, too. It’s all a process…

What makes you happy?
My fiancee (she’ll probably read this interview. Haha!). Cats, certainly. Dogs, sometimes (we just got one of those…).

Music makes me extremely happy when I’m in the moment and performing at a high level. Both live and in the studio. I’m so deeply invested in it at this point that I can get very upset and even angry if a performance doesn’t go well at this point for whatever reason. I’m working on that…

I’m a very creative person in general. I make fine art pieces including painting, mixed media, and drawing occasionally. If I hadn’t gone down the music route I likely would have gone into fine art. I also write. I had my first op-ed published in All About Jazz earlier this year that was a piece on Cleveland Jazz History. Anytime I’m creating and invested in what I’m creating I’m happy. 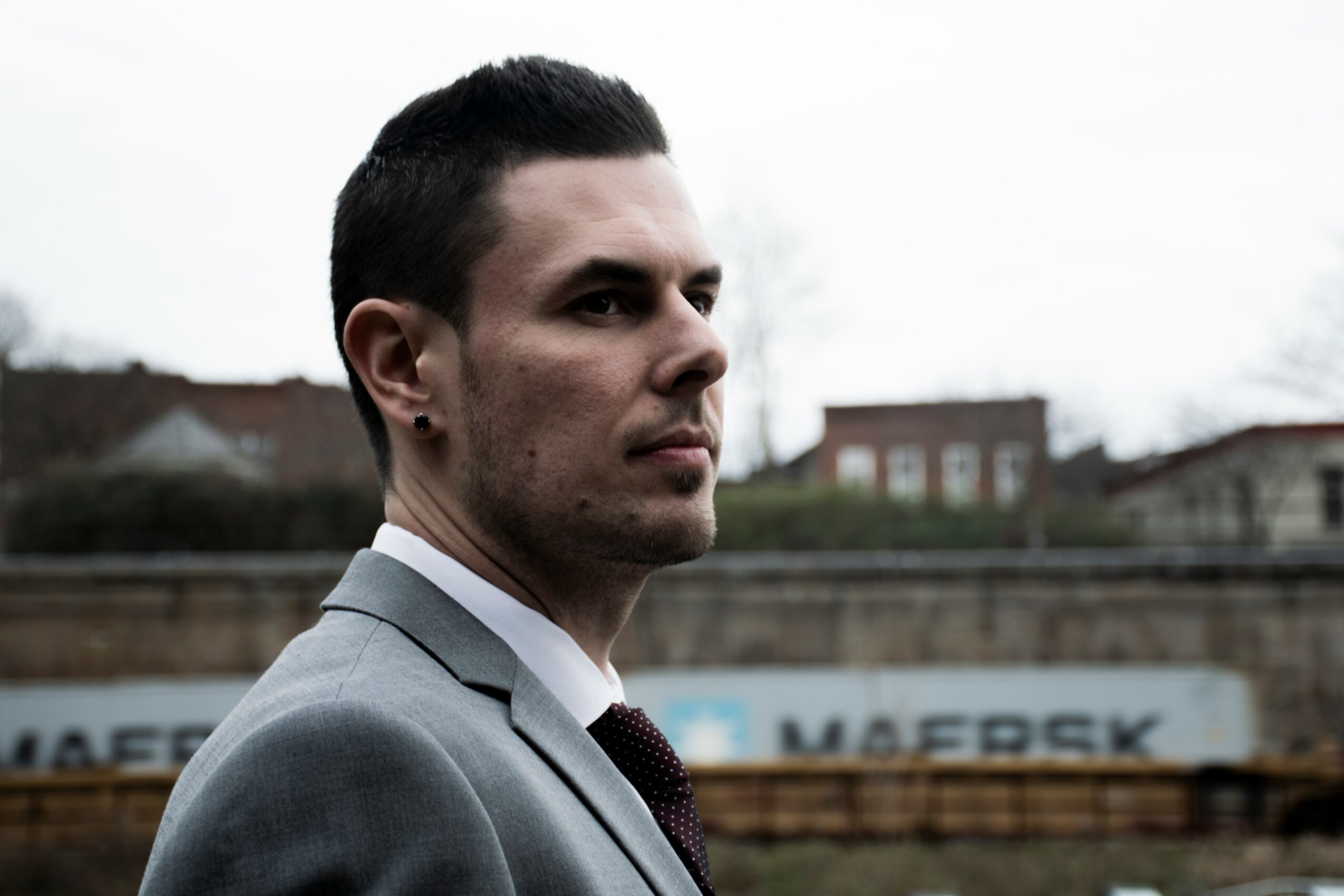 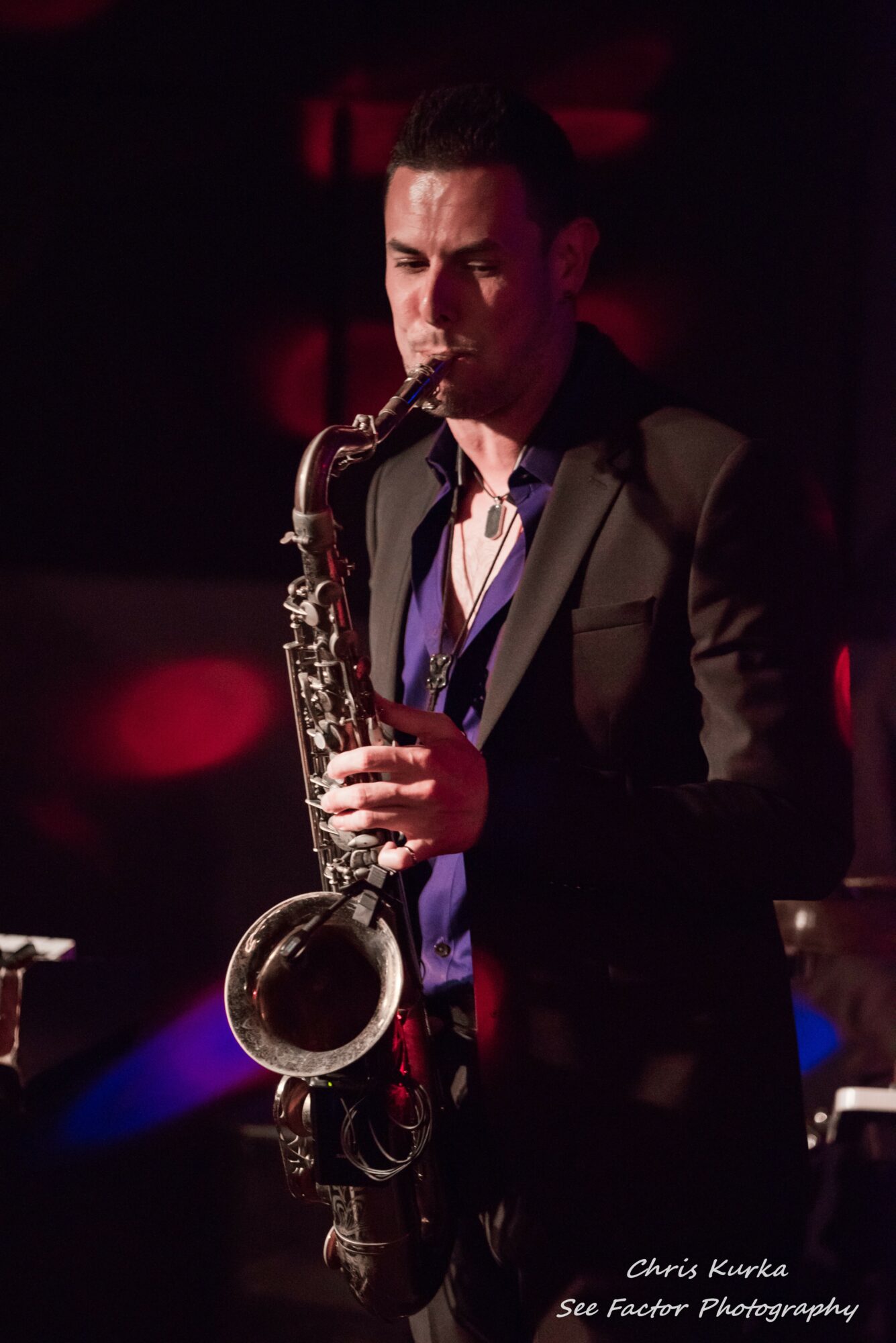 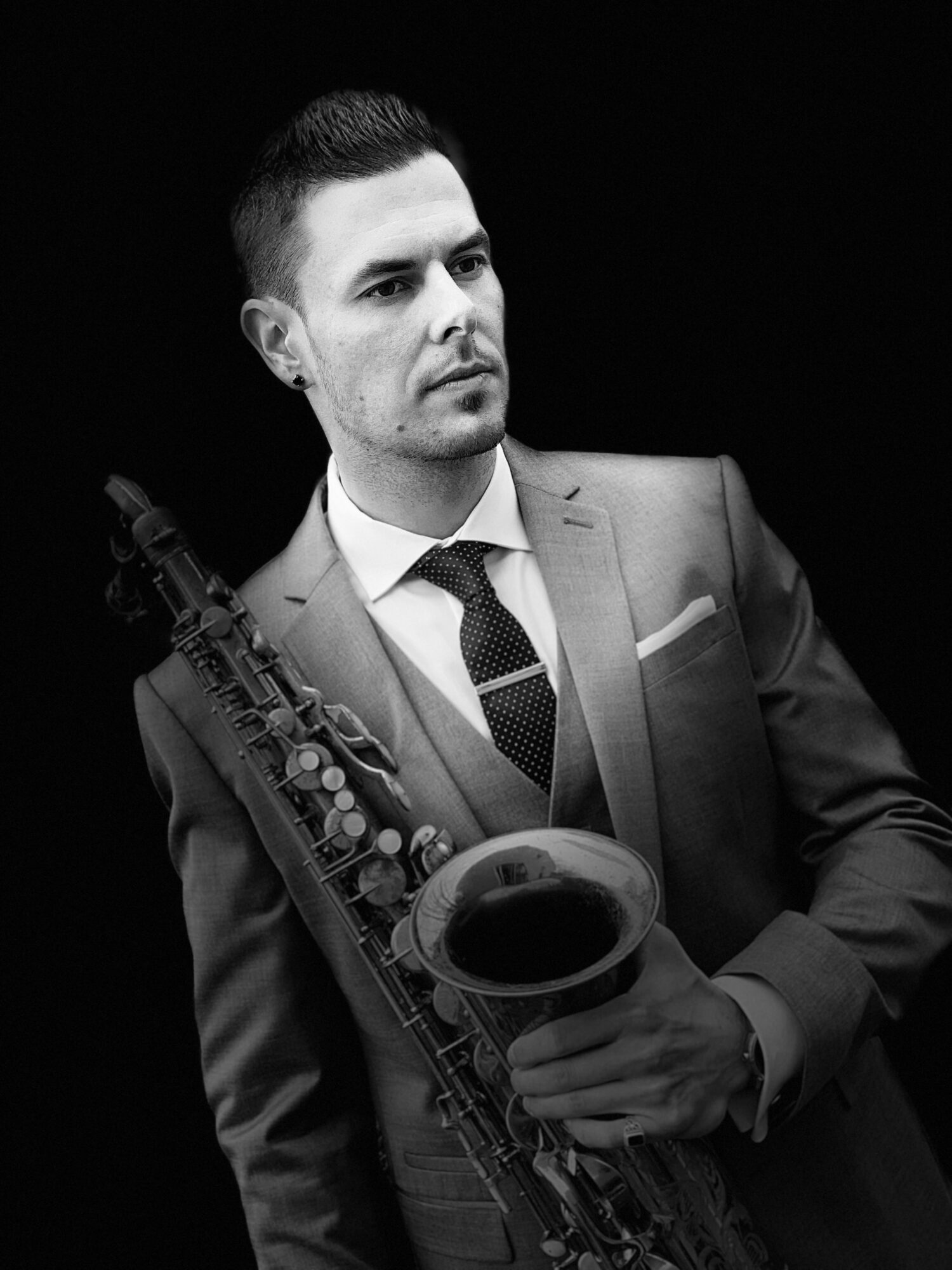 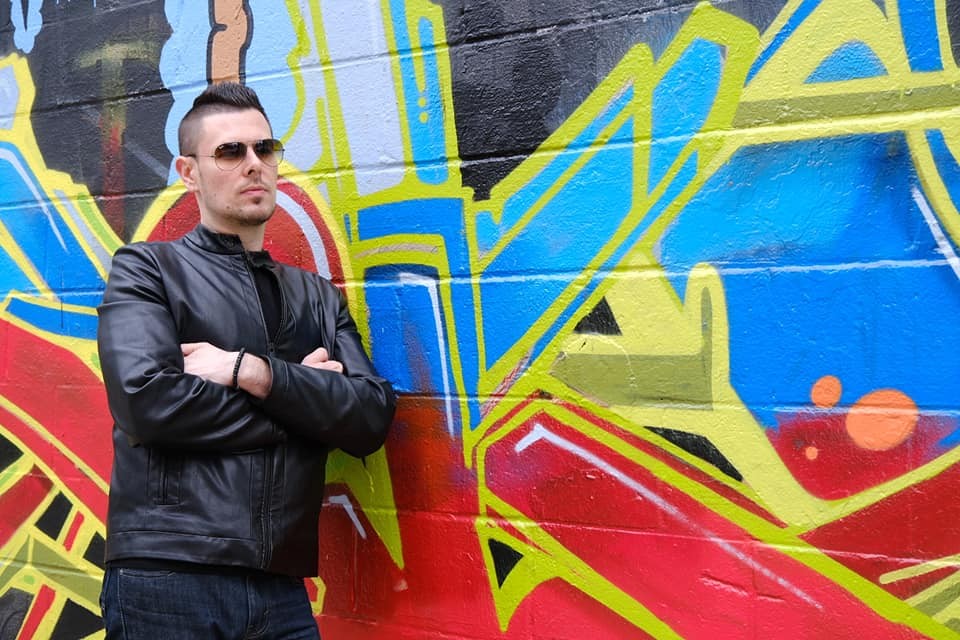 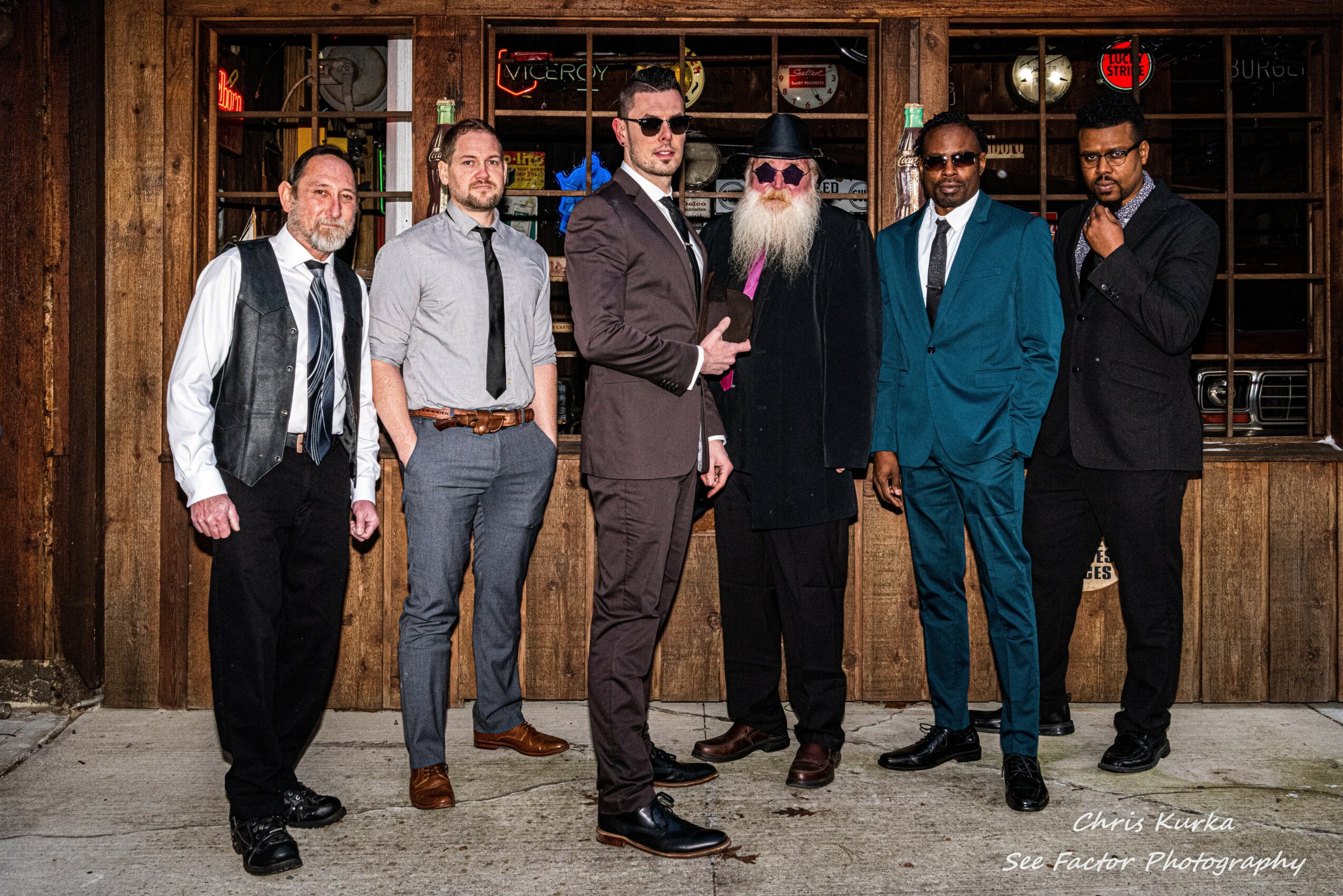