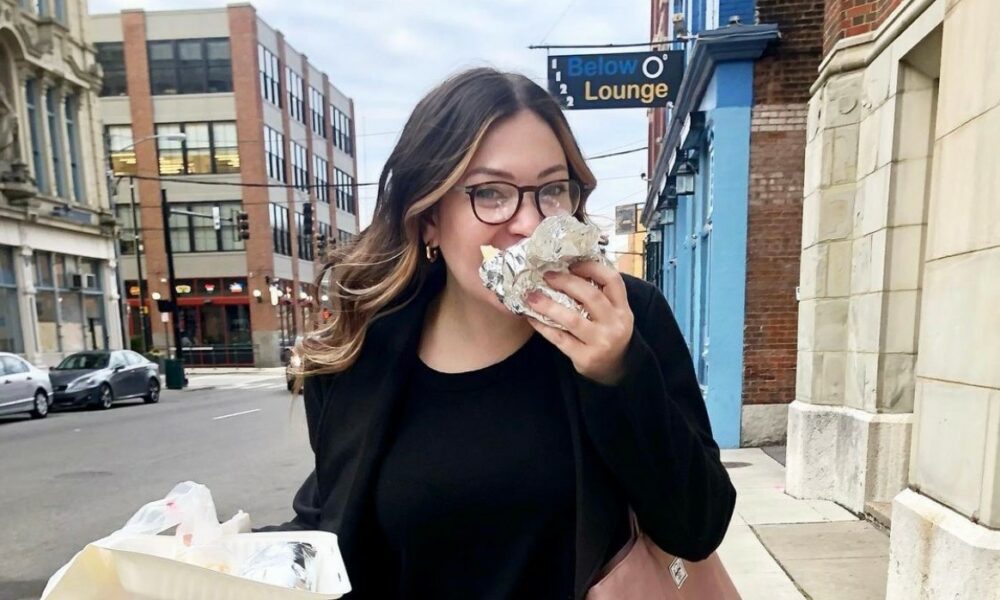 Today we’d like to introduce you to Kayla Robison.

Hi Kayla, please kick things off for us with an introduction to yourself and your story.
My first job at 14 years old was at a restaurant in my hometown in North Dakota. At first, I worked in the FOH but really wanted to work in the kitchen. My boss at the time had told me, “Girls don’t work in the back.” which was enough to fuel the fire for me to do whatever I could do to work back there. Eventually, we made a deal that if I could wash dishes and bus tables, I could work in the kitchen and I’ve been in the BOH ever since! Since then, I have run two very successful kitchens, won Food Network’s Chopped and Guys Grocery Games, been on the Today Show and many other national and local television appearances, and voted top 10 Best Chef in Cincinnati, but more importantly, I’ve established myself to be able to have a platform to help others who are wanting a chance in the kitchen and have been able to teach my daughter along the way that hard work pays off.

Would you say it’s been a smooth road, and if not, what are some of the biggest challenges you’ve faced along the way?
It was a very bumpy road to get to where I’m at now. I became a teen mom and at that time struggled with finding out what I wanted to do with my life. I knew I wanted to go to college but wasn’t sure for what. After my daughter was a year old, I realized my love for cooking and the two of us moved to Cincinnati where I enrolled in culinary school. I worked three jobs and was studying both culinary and pastry programs, leaving me with very little time for sleep or being able to see my daughter, but I had family in Cincinnati who helped watch her while I worked really hard to establish myself a career. I graduated at 21, worked a few jobs in the service industry, and by the time I was 24, I landed my first executive chef job. But the obstacles didn’t stop there. Being a young female running a restaurant at the age of 24 with a 5-year-old was very difficult. Missed out on almost every family event, a lot of milestones for my daughter, and spent many nights crying on pickle buckets because I struggled with not knowing if I was making the right decision or sacrifices. After 3 years of establishing myself as a chef, I landed the opportunity to rebrand Arnold’s menu and form there developed a work/life balance where I was able to be a mom and chef.

As you know, we’re big fans of you and your work. For our readers who might not be as familiar what can you tell them about what you do?
Currently, I am the executive chef at Arnold’s Bar and Grill, the oldest bar and restaurant in Cincinnati. I specialize in upscale bar food but more specifically burgers and steaks- hint the IG name @commandernbeef. I would say I’m most proud of the team I have and the cooks I’ve trained throughout the years. Many have gone on to become chefs themselves which is an incredible honor to have been a part of their stepping stone. I was giving rare opportunities in my starting years of becoming a chef, and being able to do the same for others is what it’s all about.

What has been the most important lesson you’ve learned along your journey?
Keeping chasing your dreams because the moment you start living them, it’s pretty incredible.

There were a million and one moments in my 16 years of being in the industry where I wanted to give up, I had all the odds against me. But I kept fighting, kept learning, stayed humbled, and it paid off. Don’t give up.