Meet James Frank of It Starts with the Shoes, Inc 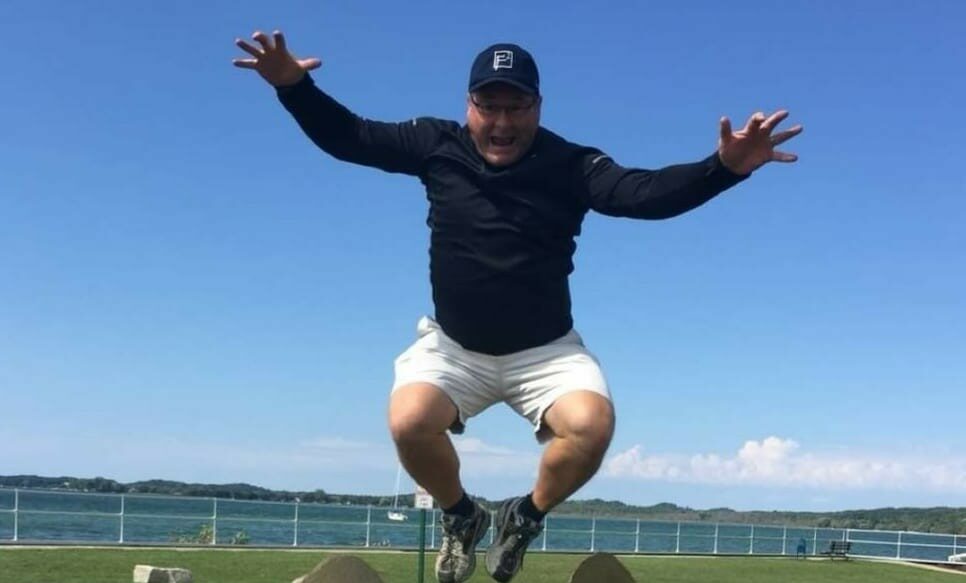 Today we’d like to introduce you to James Frank. Them and their team share their story with us below:

In 2014 Jim Frank reached out to Withrow High School to volunteer his time assisting the soccer coaching staff. He specifically chose this high school for its socio-economically disadvantaged student population.

Unbeknownst to Jim, the then Withrow Head Coach for men’s soccer had already started a campaign to even the playing field for the players. Most of the players in the soccer program were and continue to be foreign born kids arriving in the US to escape from war-torn nations, violence-riddled countries, or areas impacted by natural disasters.

The coaches had to adjust player substitution strategies based on shoe sizes shared among similar-sized players. So as to not endure this dilemma again, a campaign to reach out for funding and/or shoe donations began. And it was successful, garnering enough to outfit the team with much needed equipment, uniforms and personal gear for each player. The personal gear included PREVIOUSLY WORN shoes.

Initially, the used shoes were perceived as a great gift to solve the substitution issue and to provide players with the necessary equipment to be competitive. However, the used shoes created unanticipated stress on the players’ lower extremities due to the shoes being shaped to the feet and gait of the previous owners/wearers.

Not wanting to endure another season where players became unnecessarily fatigued, the coaches implemented a voluntary off-seasoning conditioning and training program for the players.

So, with Jim committing so much time and effort to the program, and seeing commitment from the players, the weakest link to success was no longer player commitment. It was the quality of shoes necessary to endure such commitment from each player.

As such, It Starts with the Shoes, Inc. was created to address these immediate and reoccurring needs with the hopes of growing beyond one school, one school district, one community or one region. It became OUR mission.

2022 is ISWTS’s eight year, and Coach Jim commits as much as 1000 each year to training, mentoring and outfitting soccer players in need. Since 2014, ISWTS has provided more than 3000 pre-game meals and snacks, and over 300 pair of soccer cleats.

Would you say it’s been a smooth road, and if not what are some of the biggest challenges you’ve faced along the way?
Asking for donations for reoccurring needs is a very difficult task. Asking for reoccurring food donations is relatively straight forward. Donors understand that food is a consumable contribution, and that more will be needed in relatively short order. However, shoes are another issue.

Asking for shoes is a more difficult challenge. Many donors think that donating shoes should supply a player with shoes for a year or more. But in reality, with Coach Jim committing so much time to training and coaching the players, and the kids typically wear the same shoes for training and game play, the new shoes given to players for summer conditioning and training rarely last into the fall league season.

With nearly all high schools now having artificial playing surfaces and shoe manufacturers using lighter and lighter materials to enhance shoe performance, shoes are degrading at a much quicker rate than the old heavy leather shoes played on grass fields used and played on during the youthful days by the majority of the donor demographics.

The struggle to perpetuate the supply of shoes to at-risk players to stay competitive and healthy while competing against their high school counterparts remains the single most difficult challenge in leveling the playing field for all the players Coach Jim trains. The kids are committed to training, so Coach Jim commits more of his time to training a growing ensemble of high school and alumni teams. The nutrition is being supplied by a growing list of donors ready and willing to supply pre-game snacks and post-game meals.

We have come full circle. What started out as a need for shoes, and a shoe drive ensued, led to an increase desire for the recipients to train, which led to the need to provide nutrition. Although Coach Jim’s summer training sessions generally last two hours, without easy access to transportation, the kids often have to take multiple buses to get to training and back. Typically, a three-hour endeavor roundtrip. A five-hour time commitment required nutrition, and a snack drive ensued. Since basic needs have been met to encourage kids to keep coming back, more and more kids are participating, more frequently necessitating the need for more shoes, and often multiple shoes for the same recipient. So, what started with the shoes, is now back to the shoes.

Alright, so let’s switch gears a bit and talk business. What should we know?
This story is about what Coach Jim does in his “free-time” which is orchestrating the activities needed to supply high school soccer players with basic necessities to enjoy “The Beautiful Game, whether its securing donors, soliciting suppliers, or guiding volunteers.

However, it should be mentioned that Coach Jim also is responsible for the day-to-day operations of his family-owned (since 1932) Stanmar Realty Company which involves property management and leasing of company-owned real estate.

Additionally, Coach Jim, as a registered professional landscape architect, provides land planning and design services through The Bridgewalker Company. Much of his work locally and throughout the US includes parks, athletic facilities, municipal facilities, housing and hospitality development and environmental restorations of creeks, streams and rivers.

Additionally, since “retiring” from his thirty-and-over soccer team at age 57, Coach Jim contributes approximately 750 hours a year keeping up his physical activity working shoulder-to-shoulder with a great team of horticulturists at the nationally and historically significant Spring Grove Cemetery and Arboretum.

So, back to It Starts with the Shoes, Inc.

We love surprises, fun facts and unexpected stories. Is there something you can share that might surprise us?
Well, for all the people who associate Coach Jim with It Starts with the Shoes, and the time and passion he puts into growing The Beautiful Game for those in need, he does have a family and professional life too. He met his wife Mary on a road trip to Cleveland, lured her back to Cincinnati in 1993, married her in 1994, or was it 1995? Anyway, together they raised their son Jimmy, born in 1997. Coach Jim developed his mentoring chops coaching his son Jimmy’s soccer, basketball and baseball teams. Coach Jim took particular pride in encouraging and participating in a mixed socio-economic roster of talented junior-high baseball players, a possible impetus to It Starts with the Shoes?

Unbelievably, a young man Jim coached in baseball years before, ended up being best friends and neighbors of a soccer player he coached many years later. The dots were connected when the two of them showed up together to watch a tournament game Coach Jim was coaching. Small world. 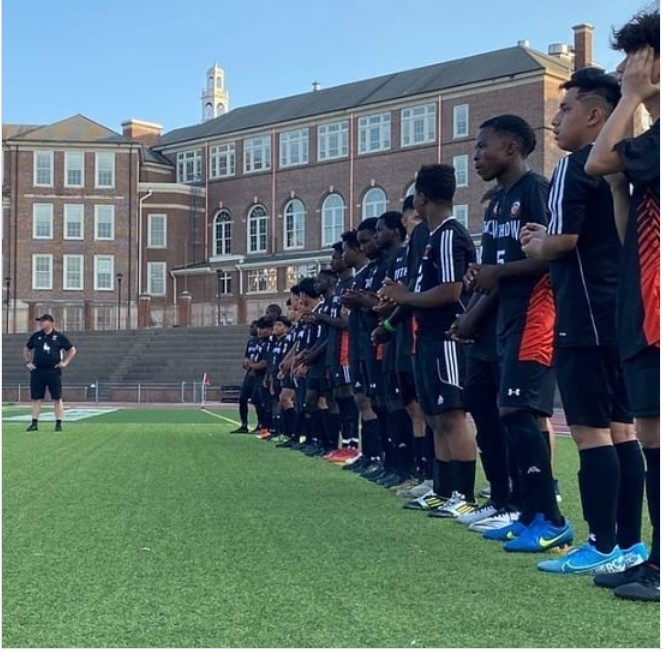 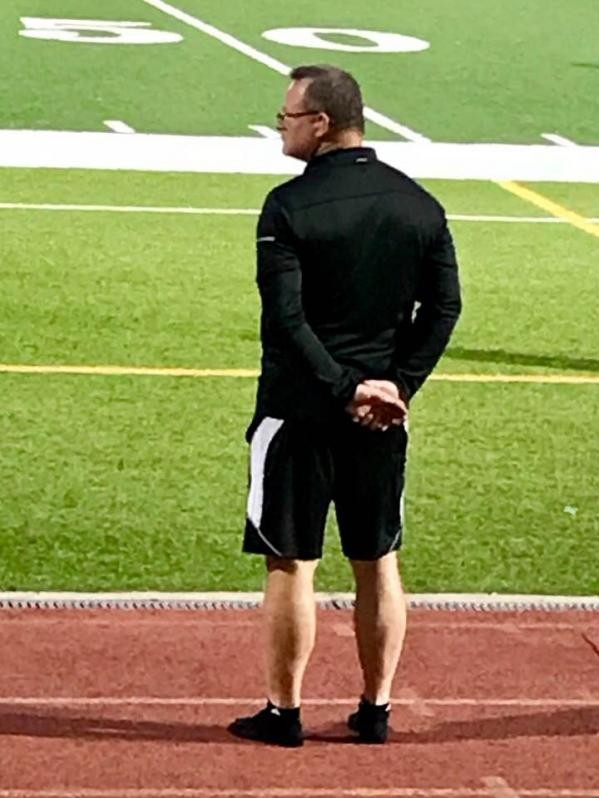 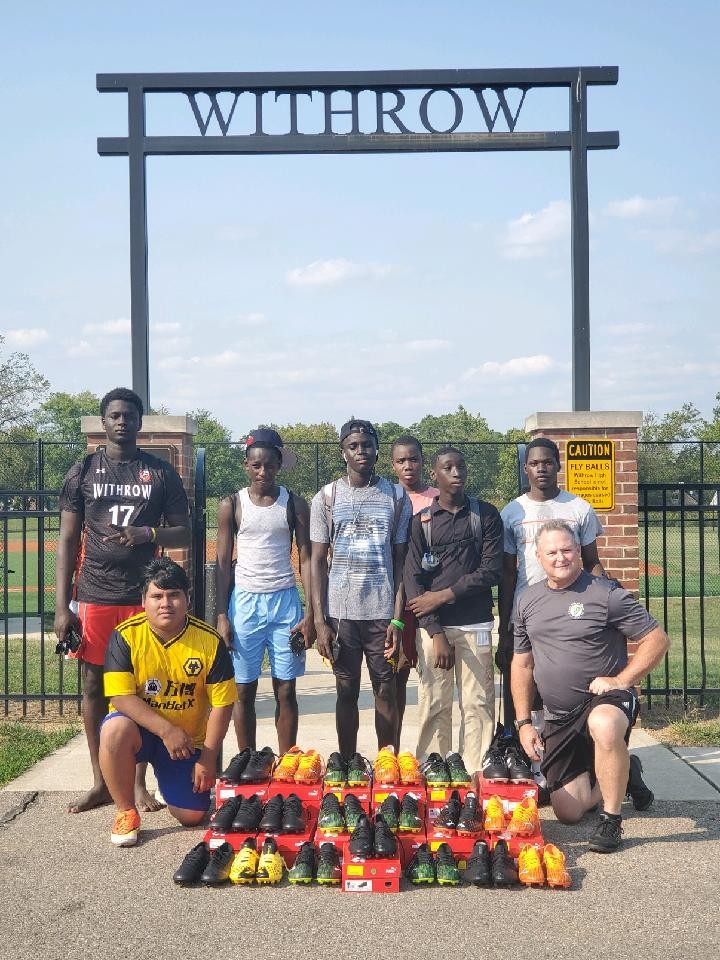