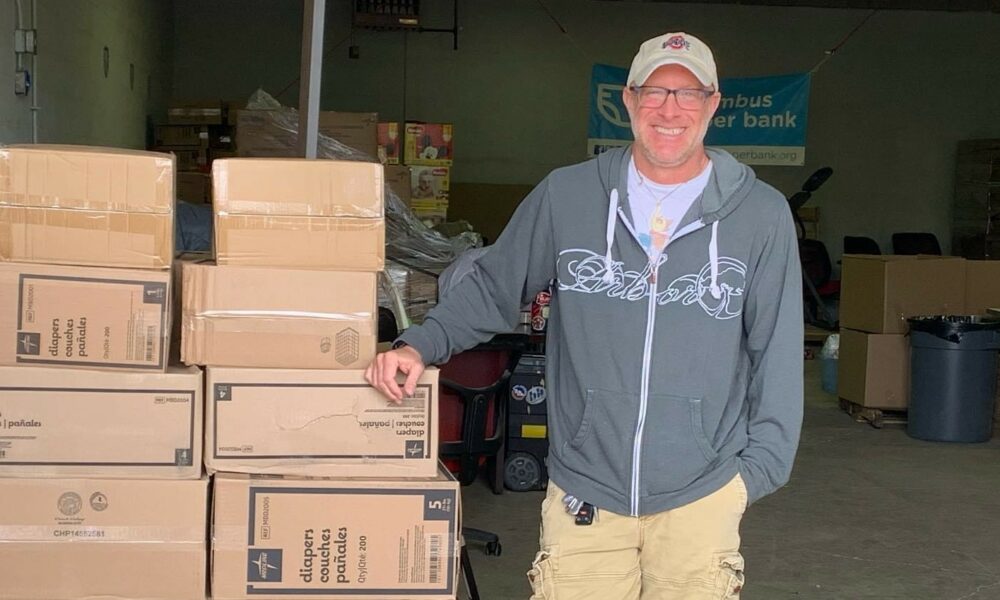 Today we’d like to introduce you to Jimmy Mehl.

Hi Jimmy, so excited to have you with us today. What can you tell us about your story?
This is how the Columbus Diaper Bank saved my life! Since 2004 I was off work in total for 15 years because of two separate work injuries as well as getting hit by a car (I was standing between 2 cars when a 3rd car lost control going 50 mph hitting a parked car and smashing my legs between the 2 vehicles. The only reason I didn’t lose my right leg was because the bumpers of the cars I was pinned between were at the same height). In total, I’ve had 4 surgeries on my shoulders, 2 surgeries on my L4 & L5 spine, and multiple procedures (too many to count) on my cervical spine. My best friend, Jason Biundo, told me about the Columbus Diaper Bank and that I should try volunteering for them after I was recovering from my 4th shoulder surgery so that I’m not sitting around thinking about my pain all the time. Before running the Columbus Diaper Bank, my outlook on life was riddled with questions for what my future would look like. Over the years I spent my days in agonizing pain as I waited and hoped that the “next” surgery that would fix me and I could go back to a normal life. I lost hope more than a few times because the pain would get so bad, I couldn’t see any positive outcome to my situation. I am ashamed to admit this, but I contemplated suicide on more than a few occasions. After taking control of the Columbus Diaper Bank, I found a renewed hope in life as I was out in the community trying to make a difference for families struggling to provide diapers for their babies.

Mike & Rachael Soboro started the Columbus Diaper Bank back in 2014 and provided diapers to a handful of local organizations throughout the Columbus area. As Mike and Jason continued to grow their pizza business, Mikey’s Late Night Slice Pizza, they had less time for the diaper bank and had considered changing their nonprofit to a strictly fundraising nonprofit. After meeting with Mike & Rachael about volunteering they asked me if I’d be interested in running it. Without hesitation, I said yes!

Why are diapers banks like the Columbus Diaper Bank so important? It is because no federal or state assistance programs pay for or provide diapers, not WIC, food stamps or Medicare, because they are considered a “hygiene item”.

Would you say it’s been a smooth road, and if not, what are some of the biggest challenges you’ve faced along the way?
My journey with the Columbus Diaper Bank has defiantly had its ups and downs. Within 10 months after taking control of the diaper bank we lost our free warehouse space and was facing an uncertain future. Our finances were fine for purchasing diapers for our current partners but renting warehouse space was definitely not in the budget. A few months later I would land our first big grant, The Catalyst Grant from Franklin County, which was a 3-year partnership grant totaling in $150,000, helped save us. We finally found a new home in Grandview and things were starting to look up. Then Covid happened! We were once again looking at an unknown future for this new pandemic our society was facing. We had to stop our diaper wrapping parties and all future fundraising events were canceled. I was fortunate to have an amazing group of close friends and family that would help with wrapping diapers with me. I also started focusing on grant writing which turned into our saving grace. Thanks to Columbus, Franklin County, and the State of Ohio, we were able to obtain grants that would make up for that loss of revenue from those cancelled fundraising events. Each year, no matter the obstacles, I was able to increase how many programs we were helping and thus increasing our output of diapers distributed into the community. Last year was another record-breaking year with 350,000 diapers distributed and this year it is looking like we will be giving out 500,000 diapers! Since I took over in 2018, I have distributed close to 1.5 million diapers here in Central Ohio.

My continued pain from my past injuries is and always will be an obstacle. As we continue to grow, I am hopeful that more people will come out and to help and support this important cause.

Can you tell our readers more about what you do and what you think sets you apart from others?
Throughout my adult life, I have always worked in the mental health field in some sort of capacity. From working on adolescent psych units at both Riverside Methodist and OSU hospital to a caseworker at multiple agencies in franklin county to an activity’s therapist/unit leader for a long-term treatment facility for troubled youth. I have always enjoyed helping others. I graduated from the College of Social Work at OSU in 2004. Because of my multiple injuries, I found it very difficult to find my way into a career as a social worker. The one thing I am truly proud of is that I never truly gave up on myself. This past year I finally was able to obtain my LSW (Licensed Social Worker) and I am currently working as a therapist in private practice at Walters Psychological Services in Westerville and Circleville. I don’t know if this separates me from others, but I’ve been told many times that when I am talking about the work I do for the Columbus Diaper Bank, it’s my passion that I have for what I do that stands out the most. My parents were only 17 & 19 when they had me and I remember how financially difficult it was for my parents to make ends meet. I think about that every day I am helping others with their diaper need, hoping that the diapers these families receive help ease that financial burden just a little bit.

If we knew you growing up, how would we have described you?
Growing up I was very outgoing and loved playing outside. I was that kid in the neighborhood that would find lost animals and either find their owners or would be taking the injured animal(s) to the local vet to be fixed. But my first love as a kid was soccer! If you were to ask any of my classmates what they remember me for they would all say soccer. In 1990, at the age of 16, I made this soccer traveling team and got to travel across Europe for a month. We trained in Holland and then played in a tournament in Austria before playing in the Junior World Cup in Italy. The actual World Cup was being played at that time in Italy and to be able to play in stadiums that the World Cup was playing in was something I will never forget! 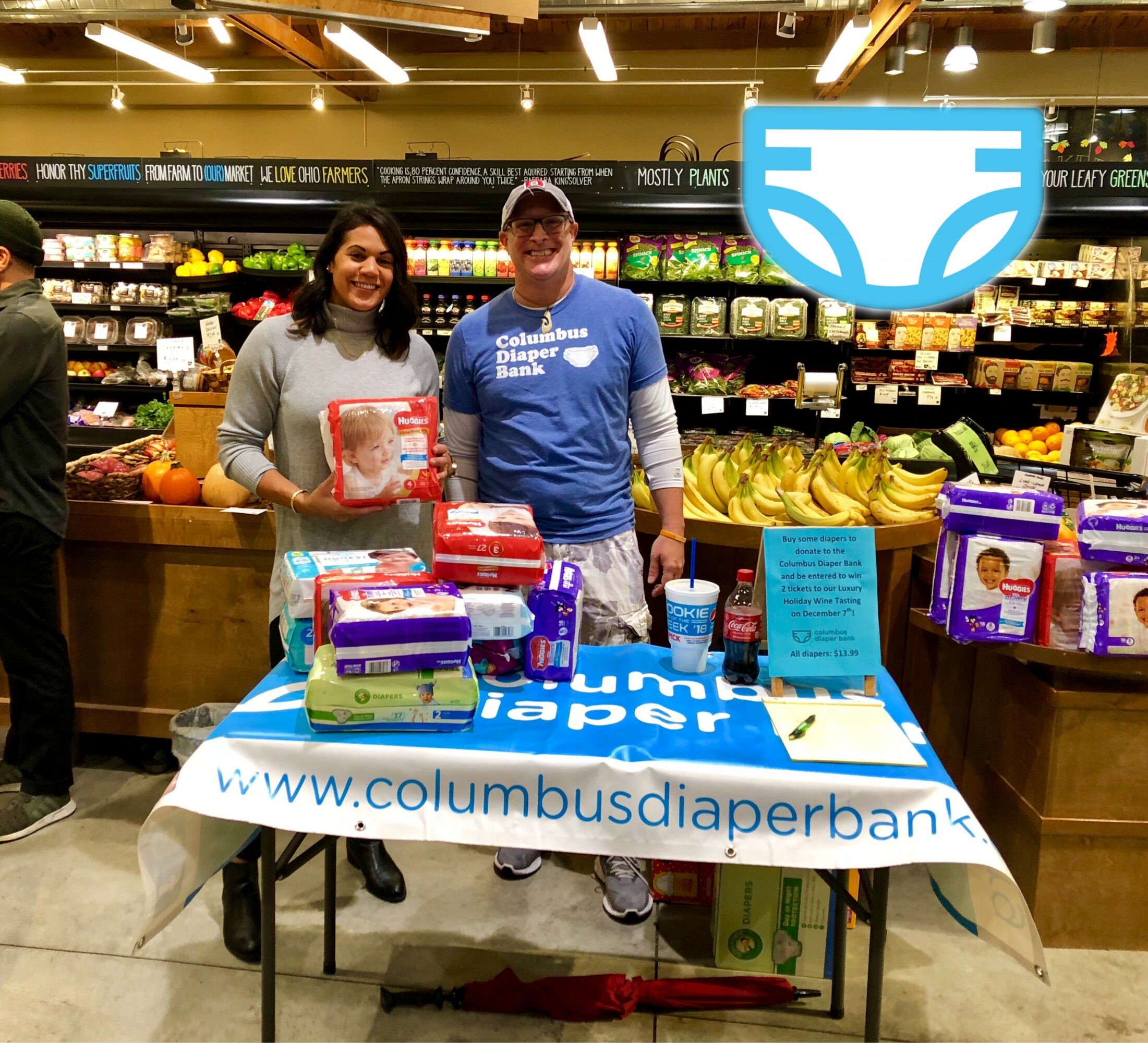 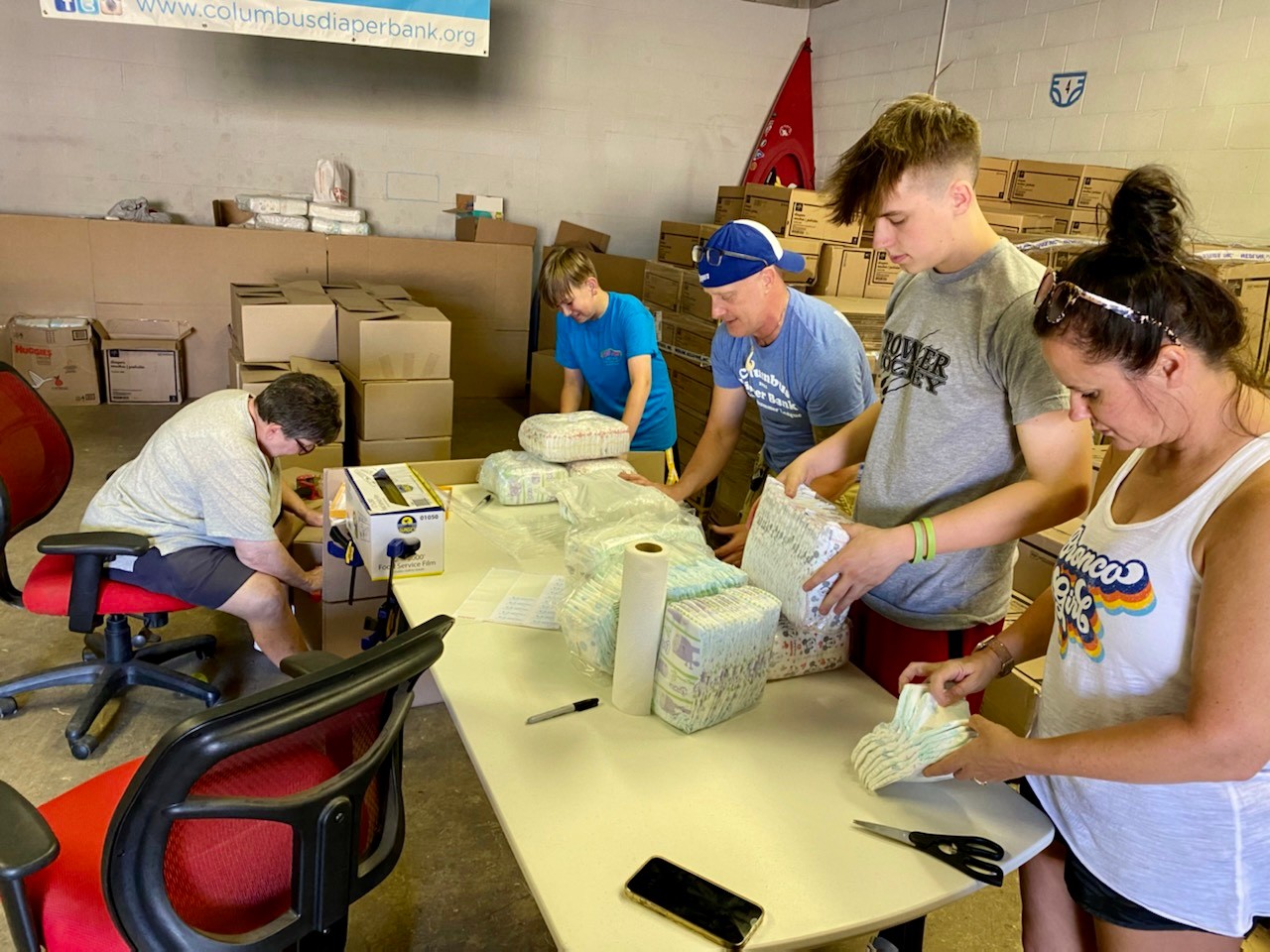 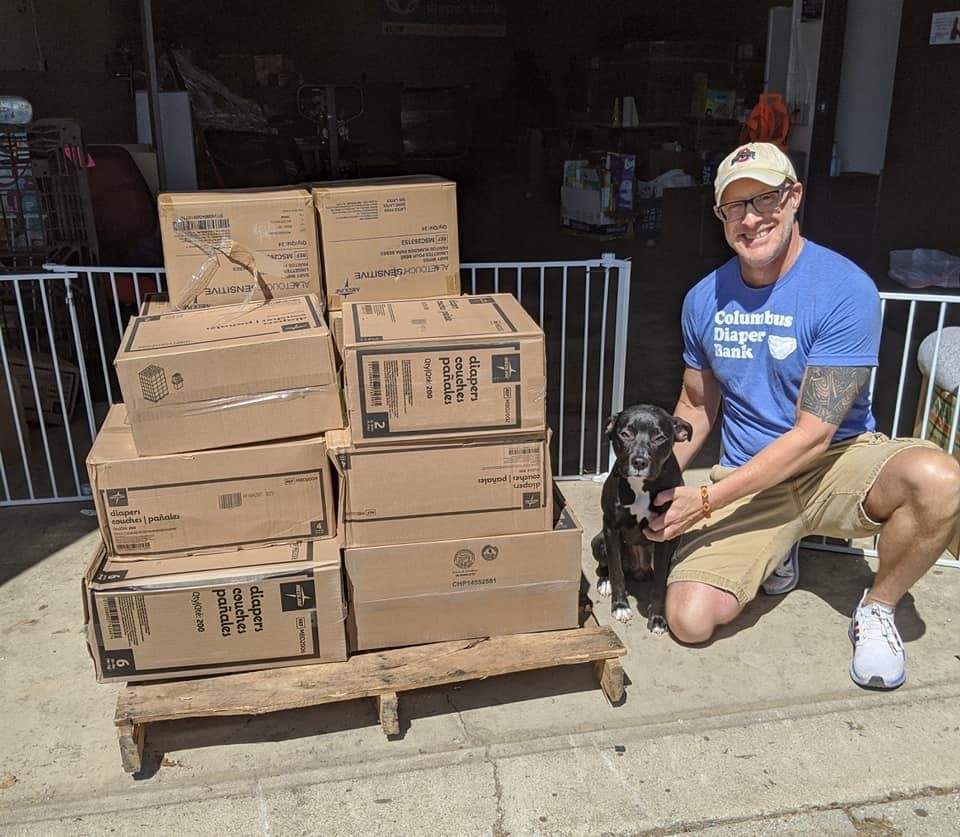 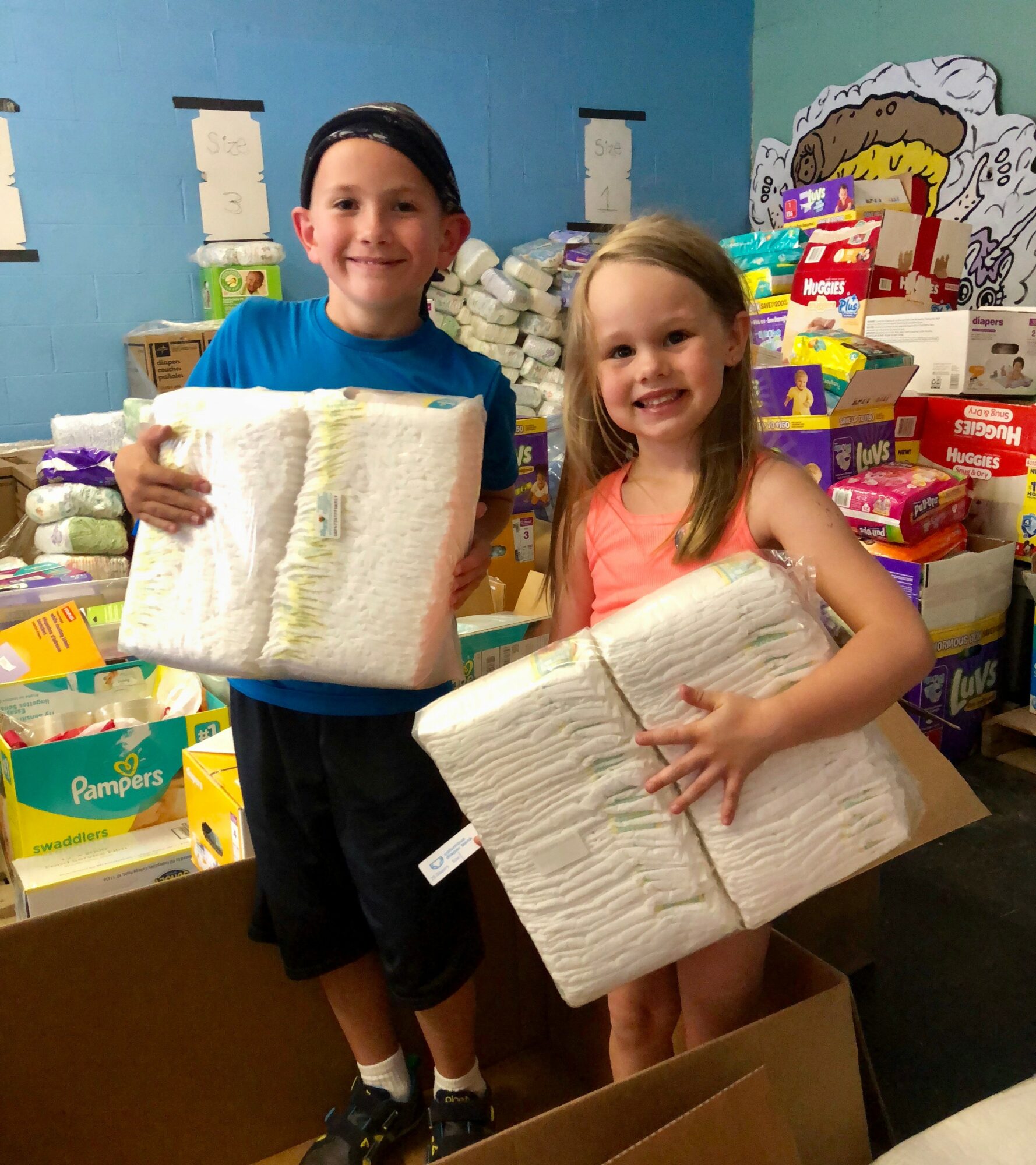