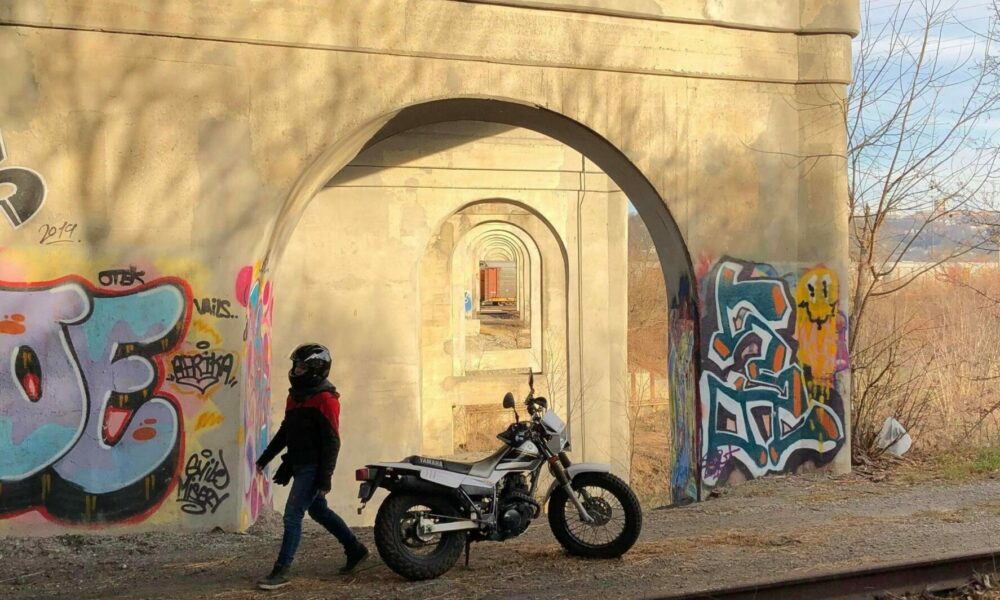 Today we’d like to introduce you to Kathryn DiMartino.

Hi Kathryn, we’re thrilled to have a chance to learn your story today. So, before we get into specifics, maybe you can briefly walk us through how you got to where you are today?
I’ve been an illustrator since I was very small! I originally wanted to illustrate children’s books because I loved to read, but as an adult and professional I had trouble finding my niche until my late 20s. My current body of work started with an illustration of a demon at a night market on a Suzuki RA125, a little dirt bike used in the Japanese tokusatsu series “Kamen Rider Black”. I did six illustrations in that series, but I had never ridden a motorcycle! Later that year I found out a friend of mine actually had several bikes, including a rare minibike (a Kawasaki KD80x), and they let me take a little ride around a parking lot one warmer day in December. After that, I was obsessed. I couldn’t get enough – I bought my own motorcycle less than three months later, a Yamaha TW200. I was (am!) hell-bent on learning to ride and being a better rider.

The illustration also developed as my skills and experience with riding and wrenching developed. My work got more detailed, and I started taking commissions of characters with motorbikes. As far as getting involved in the furry community, I really owe it all to my first commissioner, Dez, who just so happened to be involved in that community and did me the favor of sharing the work I did for them. The rest just followed from there. I had a few pieces in the 2021 The One Moto Show in Portland and I did some illustrations for a Yamaha-sponsored minibike event in Georgia called YSRDaize, both of which have been highlights of my relatively short moto-related artwork career so far.

Motorcycles changed my life though. I was feeling lost and lacking direction and coming to terms with the Crohn’s I was diagnosed with just as my career was supposed to be developing and I didn’t feel like I was going to be able to become the person I wanted to be or do anything I had wanted to do. I get on a little motorcycle and suddenly that changes. Suddenly I’m drawing motorcycles for all these amazing people I’m meeting and riding my little bikes out along the river all the time and doing things and going places I would never have expected. I would have never thought I could have the strength or knowledge or courage less than four years ago!

I’m sure you wouldn’t say it’s been obstacle-free, but so far would you say the journey has been a fairly smooth road?
Art-wise, the road before now was worse for sure. I taught college-level art courses for five years after college, and that experience encouraged me to really continue to hit the books myself as far as what I needed to do to improve at that time. I came out the other side of that much more equipped to accept the natural plateaus of artmaking and more understanding of what dedication really looks like. Meanwhile, I struggle very often with motorcycle skills since I’m a relatively new rider, and I struggle with the classic roadblocks that many riders face, such as fear, stamina, and fitting the bike to the rider. There have been times I have just been driving around some cones in a parking lot every day for weeks. There have been times I dropped my bike in a driveway or the garage. There have been times all I can do is ride in my small comfort zones.

And because of my disability, both of these things that I love to do are harder for no reason sometimes, and learning to deal with low energy days is a challenge as well – taking breaks and resting is dedication too and that wasn’t an easy lesson!

I’m still learning all the time, which I know is a classic line, but I still feel that I have a long way to go with riding and my artwork.

As you know, we’re big fans of you and your work. For our readers who might not be as familiar what can you tell them about what you do?
At the risk of sounding redundant or like a tryhard, I think you’d be hard-pressed to find any motorsports artists doing exactly the same thing as another one, let alone a lot of them being women, let alone being disabled and queer! There are probably only a handful of women that I know about drawing motorcycles. I’m a furry moto artist and I serve a predominately queer furry community and that’s pretty fantastic. It’s amazing to me how limited people think of motorcycle culture as being when even the most shallow dive leads you to a much richer community and an increasingly queer and diverse one. The rising world of women’s riding is much more accessible now than it was thanks in part to groups like Over and Out Moto and Babes Ride Out and other women’s events. People are more often rejecting the exclusivity and gatekeeping of stereotypical “biker groups” and making more inclusive communities. I’m making art for people like me, people I know are out there who might feel like they can’t find any friends who ride or they don’t feel welcome or they’ve had bad experiences in the community, or they just wish they saw more people like themselves on motorcycles.

Can you talk to us a bit about the role of luck?
Oof, I have a license plate frame from “Never Content” (a motorsports lifestyle brand) that says “Bad Luck Club” on it! Crohn’s Disease was bad luck. I’m like many people though, I’m sure, in that I’d love to blame my problems with my work or metric of success on “luck” but motorcycles also taught me that I was making a lot of excuses for why I wasn’t where I wanted to be (even if maybe I was a little hard on myself too.)

That being said, I am very privileged and fortunate to have had stable finances and can take time to recover from my illness when I need to. That’s good luck, and it’s good luck when people see my work shared on social media and reach out to tell me they like it or they want a commission! We can give opportunities for good luck to one another that way too. All it takes sometimes is the right person seeing our work or sharing our work. It made a big difference in my career, after all.

I believe strongly in luck but I also think it’s something we can improve together. 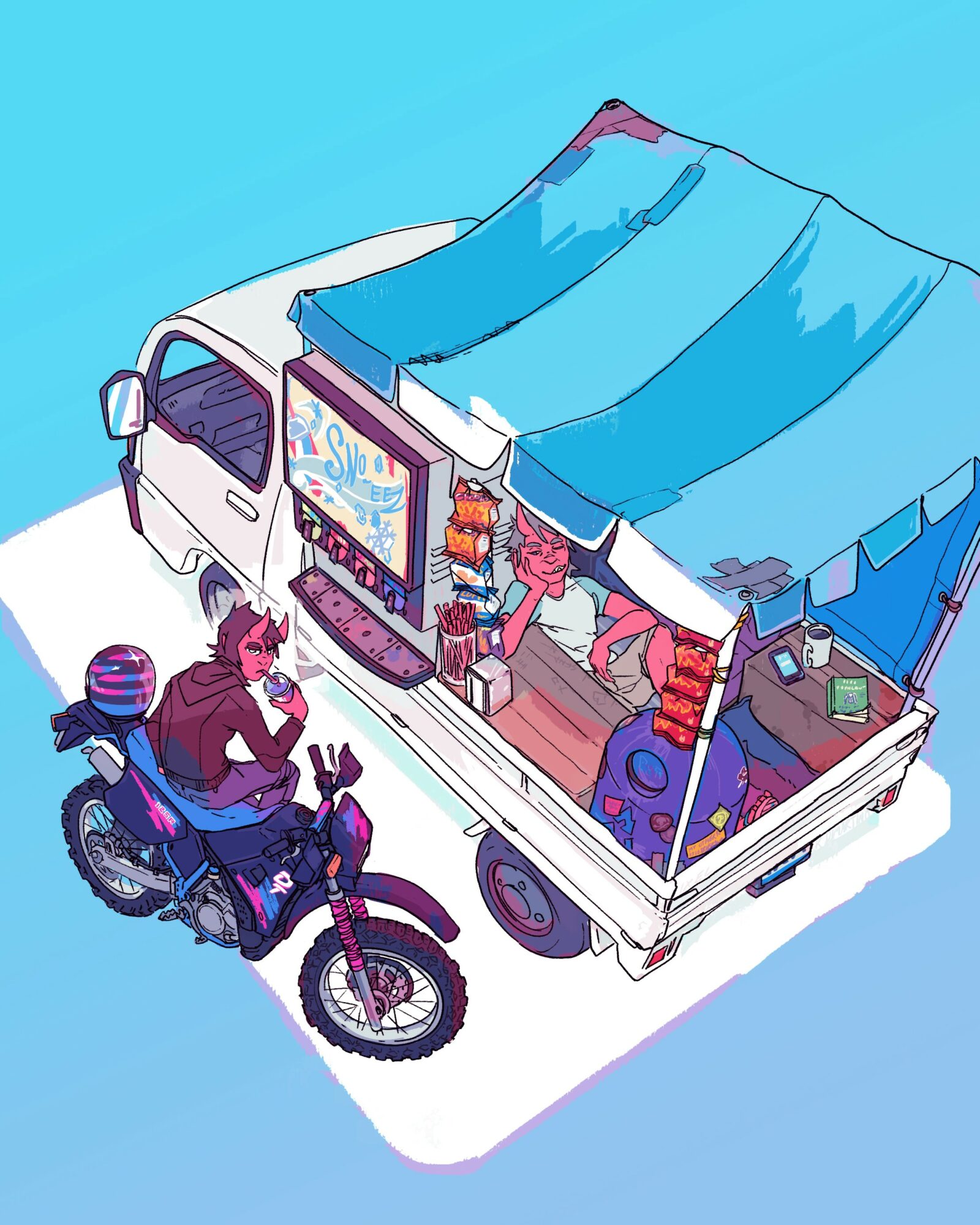 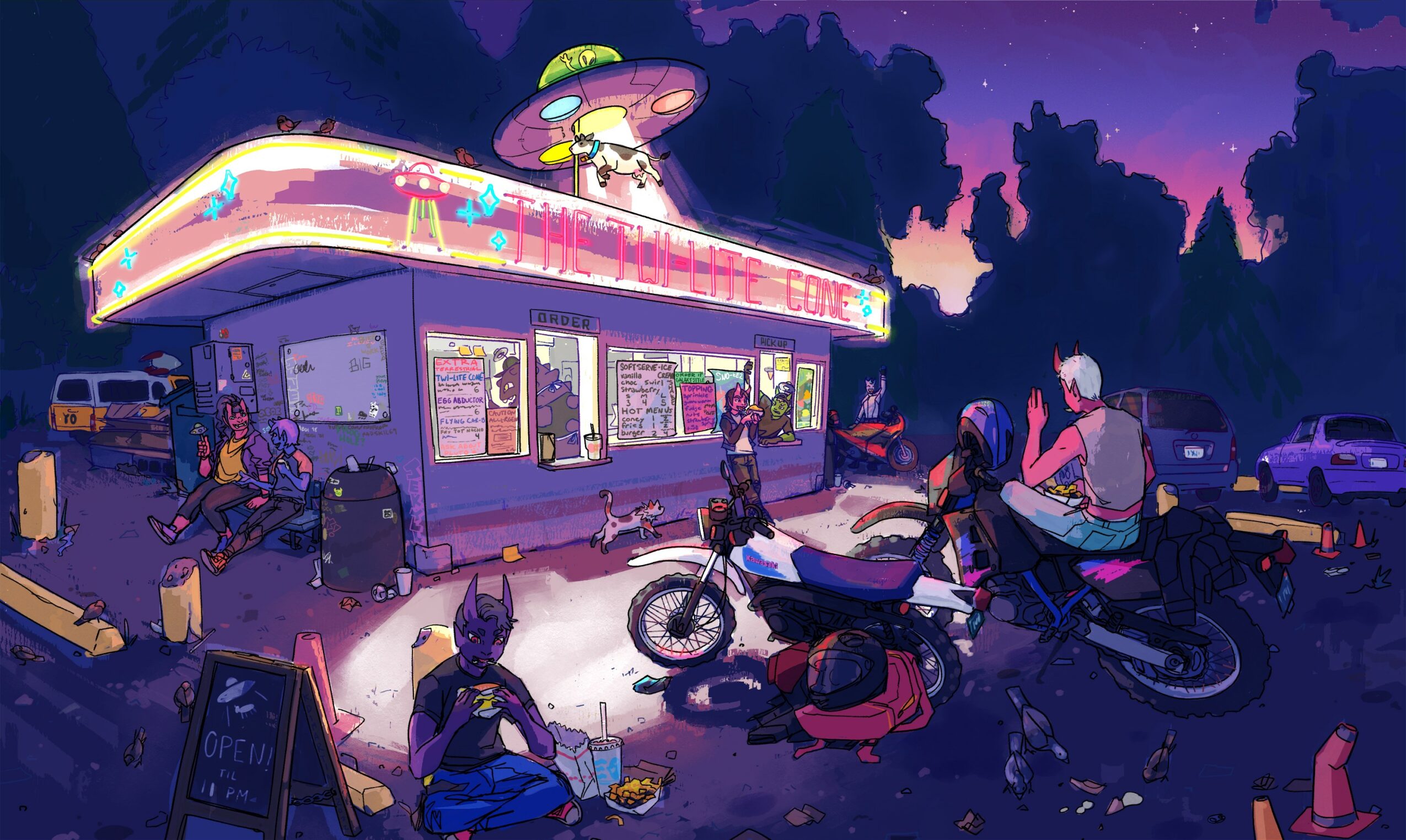 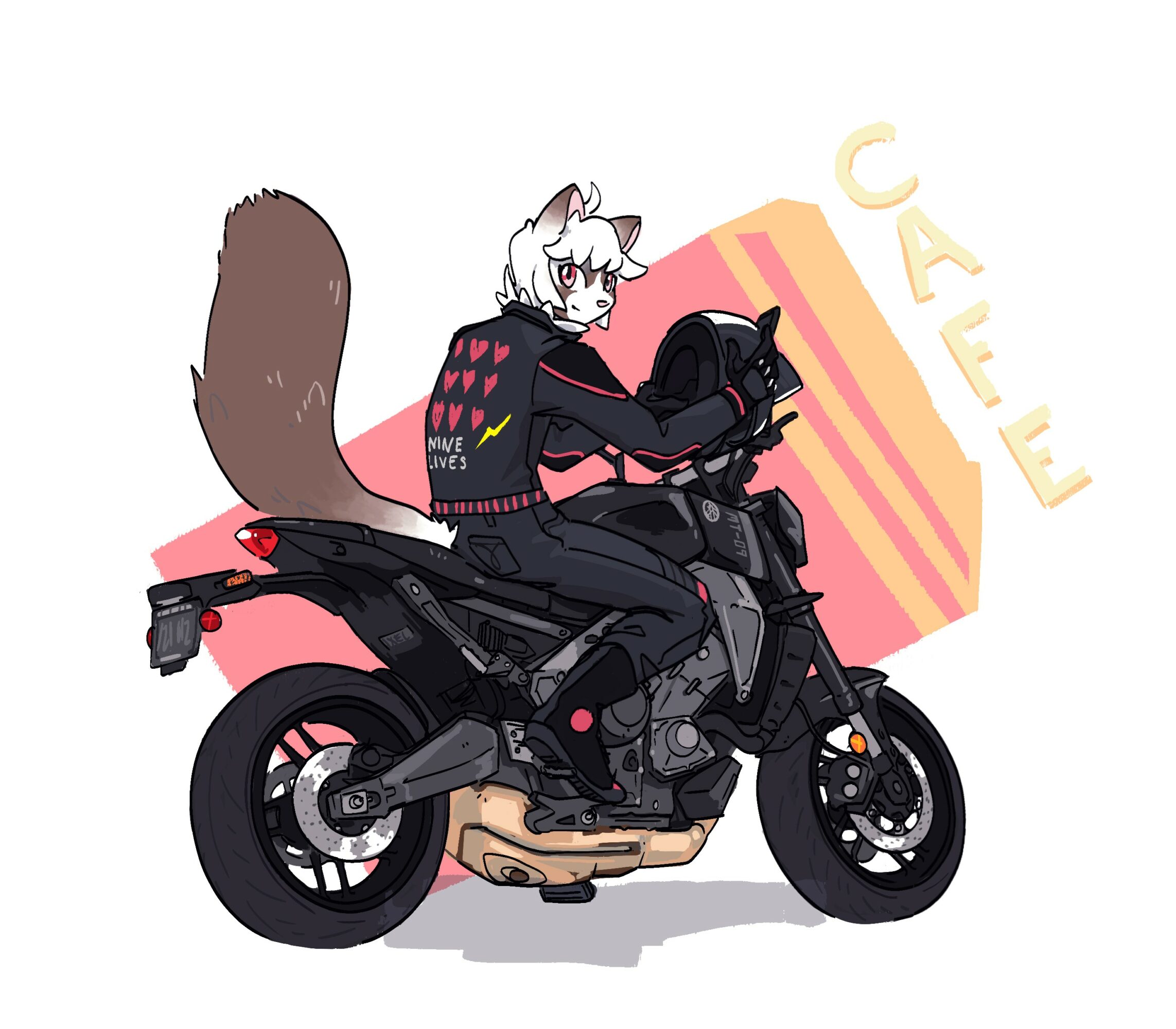 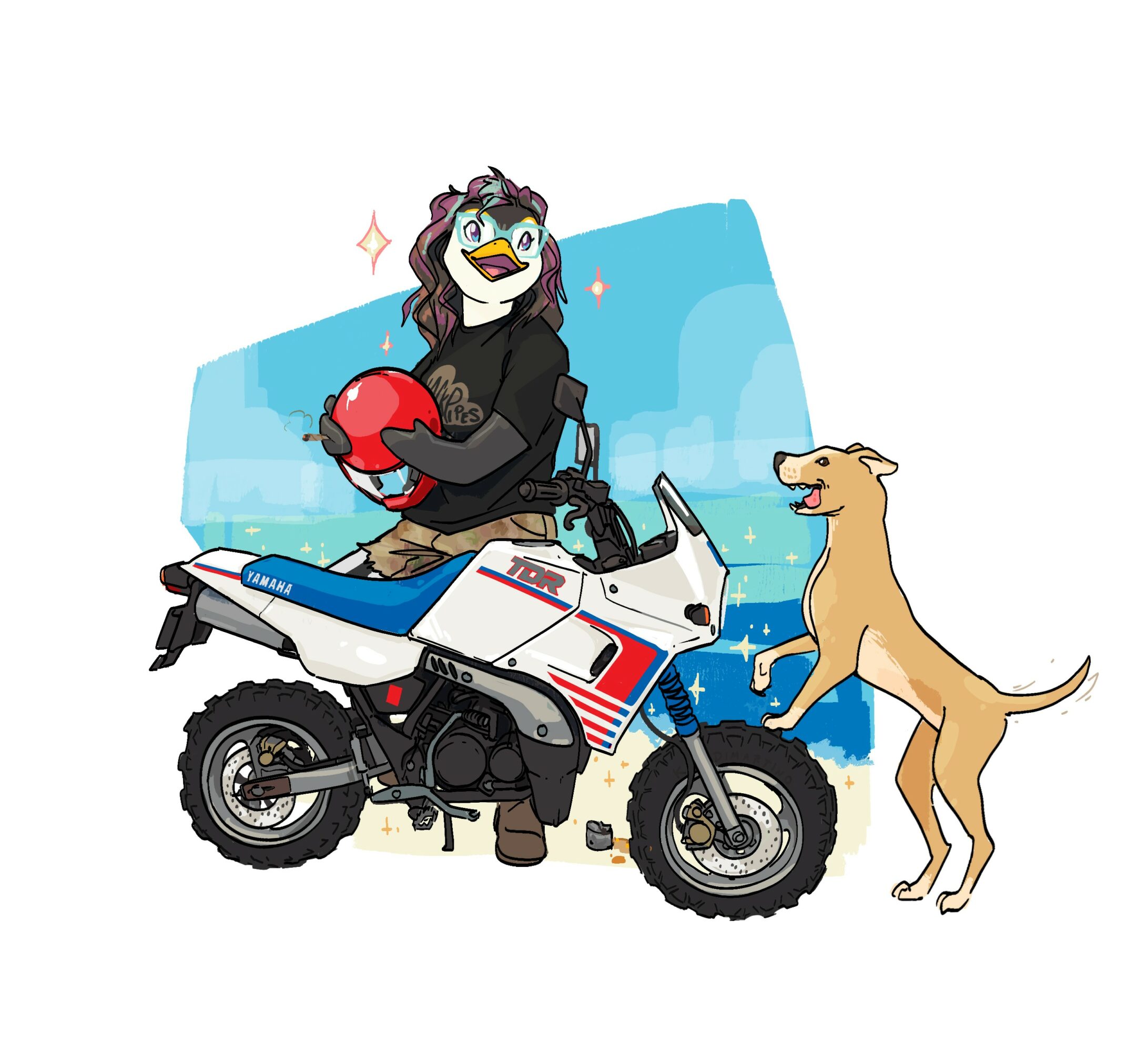 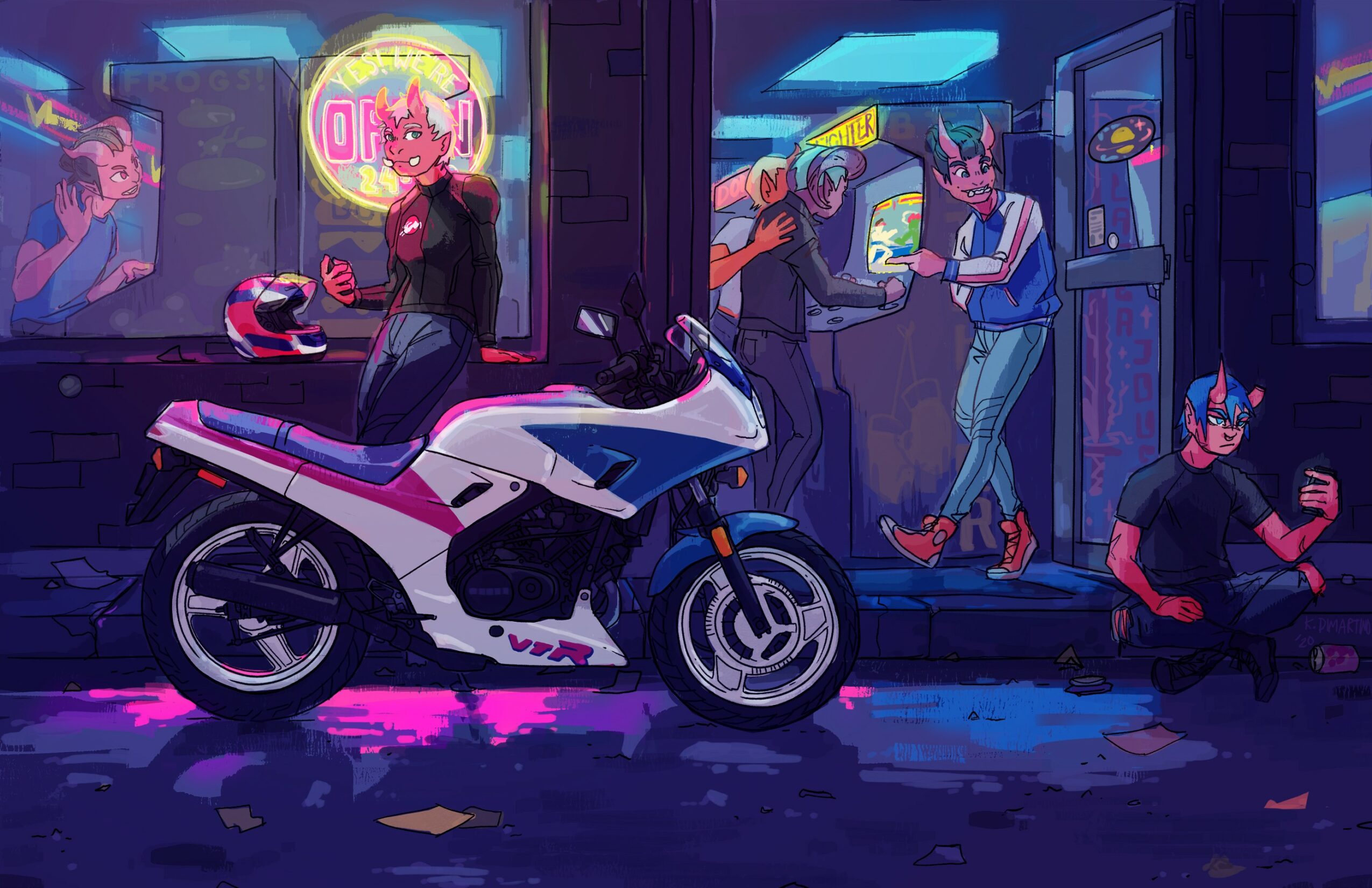 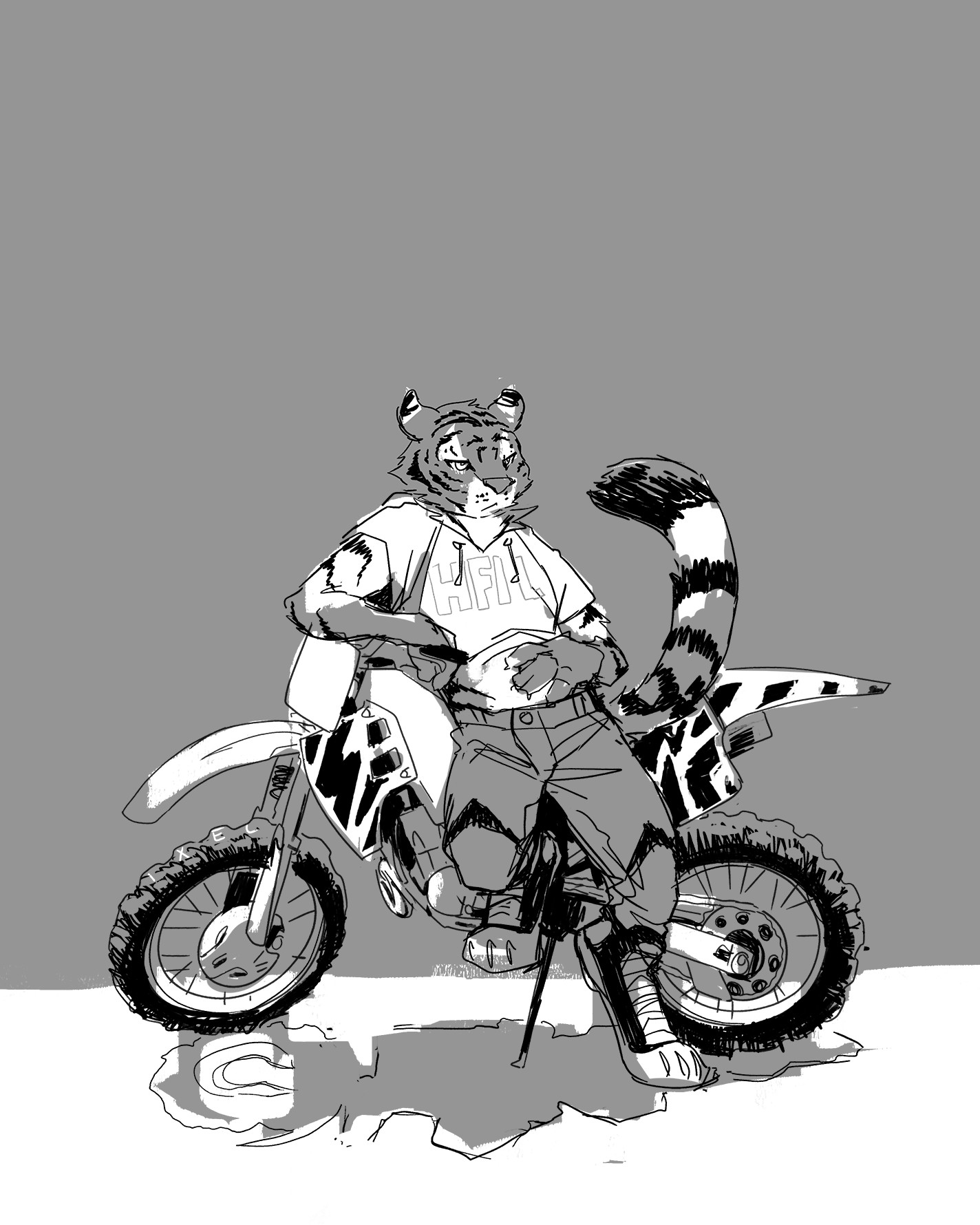